SINGAPORE -- More than 80 pieces of rare Buddhist art from the Indian subcontinent are on display at the Asian Civilisations Museum in Singapore. The exhibition, which features artworks from Asia's oldest museum in Kolkata, chronicles the evolution of Buddhist art from the 2nd century BC. 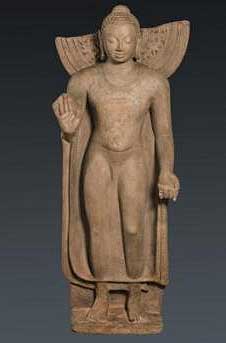 On display are dramatic sculptures and paintings tracing scenes from the life of Buddha, and symbols used to represent Buddhist concepts. Highlights include a 1.2 metre tall sandstone standing Buddha dating to the 5th century; and a 10th century carving of Queen Maya giving birth to Buddha.

Experts say the 1.2-metre-tall statue of Buddha influenced images of the Buddha in other regions, such as China and Southeast Asia.

"There's a big Indian diaspora that lived in Singapore and also there is a large Buddhist community here, so we did feel that it was relevant to Singaporeans, and hope they would come and enjoy looking at Buddhist art from the Buddhist homeland," said Ms Theresa McCullough, the senior curator for South Asia at the museum. "And also the Indian Museum in Kolkata is the oldest museum in Asia, and it set the standard for the National Museum in Singapore and other museums that sprung up subsequently."

The exhibition takes place in the 50th year of Singapore's independence, and celebrates the 50th year of diplomatic relations between India and Singapore. It is the result of a collaboration with the Kolkata museum and is sponsored by the Indian government.

However, an obelisk on display bears testimony to the fact that ties between the two countries go back much further than 50 years.

"This was erected in 1850, to commemorate the visit to Singapore by the Marquess Dalhousie, which is the British viceroy of India," said Mr Wong. "The occasion was significant and crucial in recognising Singapore's status as a port city, under British rule at that time through the government of India."

Both countries hope they will be able to inspire more people to learn about Buddhist art.

"We, in India, are working hard on this. To make it a part of the curriculums, to make our young generation visit our museums, the exhibitions, to learn the rich heritage and culture of not only our country but the world around," said Dr Sharma.

The exhibition runs until Aug 16.