Singapore -- With temples located islandwide, options are aplenty if you’d like to join in the Vesak Day festivities, soak in the atmosphere and, perhaps, gain some peace. 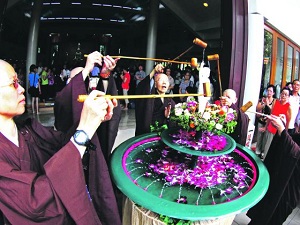 What: This beautiful temple is worth a visit because it houses the Sacred Buddha Tooth Relic in a hefty 3.5-tonne stupa. To celebrate Vesak Day, more than 2,000 lanterns have been hung along the corridors around the temple, filling the surrounding areas with light. A ceremony on the bathing of a Buddha statue will also be conducted on Saturday (May 21) from 7am to 7pm, while a light offering ceremony will be held from tomorrow until Monday, 9am to 5pm. Monks will also be giving their Vesak Day blessings tomorrow from 9am to 5pm. Where: 288 South Bridge Road

What: See devotees practise the two-hour-long “three-step, one-bow” ritual, which involves taking steps and bowing at every third step. This process is meant to pay respects to Buddha and to purify the mind as they pray for personal blessings and repentance. The monastery is also conducting the bathing of Prince Siddhartha, prayers, offerings and a “Vesak Fair”. Activities should end at around 5pm tomorrow. Where: 88 Bright Hill Road

What: Built in 1952, this is a significant Theravada Buddhist temple in Singapore. Its highlights include a massive reclining Buddha statue, a two-storey building housing a hall, a main shrine and a stupa at its rooftop, and a Bodhi Tree surrounded by four Buddha statues. Activities include food offerings and blessing ceremonies, as well as chanting and sermons.Where: 30C St Michael’s Road

What: The only Burmese Buddhist temple of its kind in Singapore, it was founded in 1875. The temple is home to a 3m white marble statue of the Buddha, the largest outside Myanmar. Tomorrow, the temple will have a session of chanting and reciting of prayers at 9.30am, followed by an offering of food to the monks at 11.30am. Where: 14 Tai Gin Road

What: Established in 1925, the temple built a new building next to its historic Main Shrine in 2014. Designed by Czarl Architects, the modern architecture houses the monks’ quarters, Dhamma Hall, meditation halls, a cultural centre, dining hall and a communal area. Tomorrow, the temple will be conducting the ritual of the bathing of Buddha for the entire day, as well as a candle procession at 7.30pm. There will also be food-offering ceremonies at 6.30am and 11am. Where: 50B Jalan Bukit Merah
TOP