Singapore -- A mega exhibition of Buddhist relics is proving popular among believers here but has drawn the ire of the Dalai Lama’s Office. 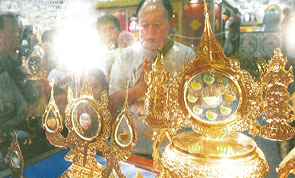 << Controversial: The exhibition has attracted more than 30,000 people, but the Dalai Lama’s Office says believers would be worshipping an evil spirit.

Touted as the biggest organised here, with more than 100 million relics – pearl-like remains of spiritual masters after cremation – the event opened last weekend at the Singapore Expo.

Over the weekend, some 30,000 people flocked to the exhibition, which will run until Sunday.

But believers were told they would be worshipping an “evil spirit” – by the Dalai Lama’s Office in Dharamsala, India.

The statement hit out at the organiser, Gelugpa Buddhist Association Singapore, for staging the event and questioned the authenticity of the relics.

In its response, the association said it is a legitimate sect but not aligned with the Dalai Lama’s teachings.

The local Buddhist authority, the Singapore Buddhist Federation, declined to comment even after being contacted several times.

Buddhist Fellowship president Angie Monksfield saw the quarrel as a self-contained one: “There are differences in the groups in the Tibetan tradition, and it’s up to them to resolve them.”

Both the Dalai Lama and the Gelugpa Buddhist Association belong to the Tibetan Buddhist tradition. The majority of Buddhists here belong to the Mahayana tradition, which originated in India and spread to China.

She said believers should decide for themselves if they wanted to go to the event, adding: “Personally, I wouldn’t go because just looking at relics doesn’t add any value to my spiritual development.”

A Straits Times check confirmed that a statement was issued by the Dalai Lama’s Office. It expressed “deep concern” about the exhibition, and that the Gelugpa Buddhist Association “actively opposes (the Dalai Lama’s) advice and teachings”.

It said that any person associated with the sect “effectively becomes non-Buddhist”.

Fliers of the statement have been distributed in some Waterloo Street shops and restaurants by anonymous parties. The area is popular with Buddhists.

The exhibition is free. The association will hold a 500-table charity vegetarian banquet on its last day. The most expensive table costs $3,800 for 10 people, and tables are nearly sold out.

Ms Jenny Chow, secretary-general of the Gelugpa Buddhist Association, said money raised from the dinner and alms will go to building a Buddhist relic museum in Singapore.