SINGAPORE -- Head of Ren Ci Hospital, the Venerable Shi Ming Yi has been charged with alleged forgery, conspiracy and misuse of funds. 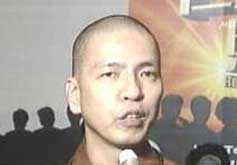 He also faces one count of alleged forgery for the purpose of cheating and one count of abetment for allegedly falsifying accounts.

Two of his associates Raymong Yeung and Phua Seow Hua were also alleged to have gone into conspiracy with the Venerable and were also charged in court Tuesday.

Separately, a volunteer from Ren Ci was charged with allegedly possessing some 70 copies of obscene film.

The case will be heard in court on August 4.

Venerable Ming Yi has been on leave for five months before his arrest on Monday night.

He had been under probe by the Commercial Affairs Department.

The Commercial Affairs Department was called in after auditors engaged by the Health Ministry highlighted possible irregularities in some of the charity's financial transactions.

The Ministry of Health had said that several transactions, which involved several million dollars, could not be satisfactorily explained.

Ren Ci and 11 other large Institutions of a Public Character were subject to the Health Ministry's general review in July 2006.

Ren Ci is believed to be the third largest health charity in Singapore after the National Kidney Foundation and SingHealth Endowment Fund.

The Commissioner of Charities has suspended Venerable Ming Yi from his office as Chief Executive Officer of Ren Ci Hospital & Medicare Centre with immediate effect.

He will also be suspended from his executive positions in five other charities: Foo Hai Ch'an Monastery, Foo Hai Ch'an Buddhist Cultural and Welfare Association, Singapore Buddhist Free Clinic and The Singapore Regional Centre of the World Fellowship of Buddhists, and the
Katho Temple.

He remains the religious leader of the Foo Hai Ch'an Monastery.