Singapore -- The first largest conference of Buddhist scholars in the region started here on Monday morning not with a bang but with an apology. 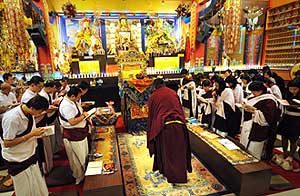 << About 150 scholars, professors, monks and theologians from as far as Iran, the US and Germany are here to discuss Buddhism's spread in Southeast Asia. -- PHOTO: ALPHONSUS CHERN

'I'm sorry to have taken up so much time,' said Mr K Kesavapany, director of the Institute of Southeast Asian Studies, in his opening address.

'Now, as the Buddhist saying goes: Do not speak, unless it improves on silence, I shall end my remarks.'

Mr Kessvapany's short 10-minute speech is an apt start to the conference, which ends on Wednesday.

It is the first project of Iseas' Buddhist Research Centre, set up last month.

About 150 scholars, professors, monks and theologians from as far as Iran, the US and Germany are here.

Together they will present 56 original papers discussing the cross -cultural spread of Buddhism in southeast Asia, which Mr Kessvapany described as 'entirely peaceful'.

He added: 'In the present era of conflicts in the Middle East, Afghanistan and elsewhere, the blessed Buddhist message of love, peace and non-violence, which is also found in other religions, is much needed.'

He added that the conference is purely an academic and scholarly one, and there are no political or religious overtones or subtexts.A conference book on the papers submitted is expected to be published later this year.