SINGAPORE -- The 5th Nalanda Mentor Group meeting in Bodh Gaya in the Indian state of Bihar has been concluded. 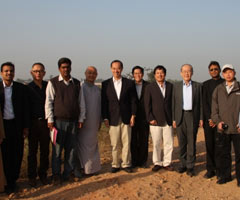 The group, which included Singapore's Foreign Minister George Yeo, called on the state's Chief Minister Nitish Kumar and updated him on details of the two-day meeting, which ended on Friday.

The Bihar government also offered for consideration two plots of land to the Singapore Buddhist Lodge to build a Pilgrim Centre for Singaporeans visiting Bodh Gaya.

The plots are near to where Lord Buddha gained enlightenment.

Mr Yeo accompanied the delegation to view the plots on Saturday.

He said: "The Chief Minister told me that we will then go through the procedures for the land that has been allocated to us. There is a hope that we can begin work on the Pilgrim Centre very quickly."
TOP