Singapore -- REN Ci Hospital founder Ming Yi admitted to the police last year that he had lied to them about a $50,000 sum of money which he knew was an unauthorised loan from the charity's coffers to his former personal assistant. 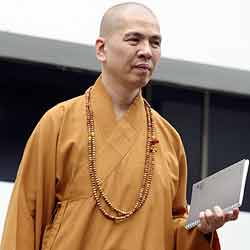 <<  The Buddhist monk confessed to the investigating officer from the Commercial Affairs Department that the money was not for buying Buddhist statues, as he had originally claimed. -- ST PHOTO: WONG KWAI CHOW

The aide, Raymond Yeung, 34, had told him he needed the money urgently to buy a house in Hong Kong while his housing loan application was being approved.

Ming Yi's statements, made on March 27 and March 31 last year to Assistant Superintendent Richard Wong, were submitted to court yesterday, on the fifth day of his joint criminal trial with Yeung.

In them, the Buddhist monk confessed to the investigating officer from the Commercial Affairs Department that the money was not for buying Buddhist statues, as he had originally claimed.

'I agreed that I have lied and was trying to cover up for him,' Ming Yi, 47, told Superintendent Wong, who took the witness stand yesterday.

On Monday, the court had heard Yeung's confession to the police that the loan, obtained on May 17, 2004, had gone towards renovating an apartment in Hong Kong.

Ming Yi looked calm as parts of two statements he had given to Superintendent Wong were read out in court.

In one, he claimed to be 'too eager' to help without giving much thought to whether it was 'right or wrong'.

It was the first time Yeung had asked the monk for a loan since he became his personal assistant in 2001.

He said his 'simple thinking' was to go with Yeung's suggestion to make the loan out to the Mandala Buddhist Cultural Centre, a shop that sells Buddhist artefacts.