Monk with the 5Cs 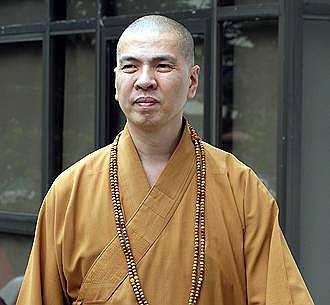 << Lap of luxury: Former Ren Ci chief Ming Yi had a membership at the prestigious The Vines Resort & Country Club in Perth, Australia. — The Straits Times

He had credit cards – at least nine from various banks bore his real name of Goh Kah Heng. He also held at least three supplementary cards for his personal assistant Raymond Yeung.

He had condominium units – he bought and sold at least six private properties in Singapore and Australia over 20 years.

He had cars – he bought at least three BMWs in six years, including one for Yeung.
And he had a country club membership – at the prestigious The Vines Resort & Country Club in Perth.

The spending habits of the monk were revealed in court over the past two weeks, where Ming Yi, 47, and Yeung, 34, face charges of conspiring to falsify a Ren Ci payment voucher and of giving false information.

The prosecution attempted to paint him out to be a spendthrift who was lax with his own money, and possibly that of the charity he founded too.
By his own admission, Ming Yi was a “modern-day monk”.

“Buddhist monks are no longer living in the mountains or in the forest. We are in the city now,” he said when responding to a question about how religious people were very different now.

When quizzed about his horse named Venezuela, Ming Yi said he wanted it as a pet.
“Not many of us in this courtroom are horse owners. Can you tell us the monthly maintenance?” asked Deputy Public Prosecutor Jaswant Singh.

Ming Yi said he could not remember. Receipts produced by the prosecution showed that Venezuela cost him A$2,000 every two months.

At one stage in the trial, Ming Yi admitted being easy with money.
“Were you easy with Ren Ci’s money as well?” DPP Singh shot back.

“No,” said the monk. “Like I said, a lot of religious people, not only myself, are very different now.”

In the late 1980s, the monk bought his first property in Mountbatten Road, financed by donations from devotees and a mortgage loan.

In 1994, he used money from the sale of the Mountbatten property to upgrade to a S$1.4mil (RM3.42mil) two-storey house in Bedok Ria Crescent, where the lodge was relocated. He paid the amount in full.

A year later, he bought an apartment for S$1.38mil (RM3.37mil) at The Atria in the East Coast. This was an investment to help Ren Ci, he said.

These last two properties were bought at a time when he had just set up Ren Ci and he had earlier stated that they were difficult times for the charity in terms of raising money for its work.
More investments followed, this time beyond Singapore’s shores.
He went to Perth where he bought a plot of land for the Foo Hai Chan monastery, where he is abbot.

“It was my mistake at that time. I should not have purchased the land,” he said. “I think at that point in time, we talked about Foo Hai Chan going further etc, but it did not materialise, so eventually we sold it.”

Before that piece of land was sold, a A$300,000 (RM870,000) house was built on it. He also had a A$1.48mil (RM4.3mil) penthouse, which came with a private lift, in Melbourne.
DPP Singh said: “While you want the court to believe that you were trying to do your utmost where Ren Ci is concerned, you yourself were living the good life in Perth?”
Ming Yi said: “Eventually I did not stay there. I think I was only there three, four times. I don’t really go there.”

The prosecutor pressed on: “Is it okay for Buddhist monks to have properties in various parts of the world? Is that what a modern monk does?”

“There are many people who have that,” replied Ming Yi.

When asked if that was his belief, he said: “I’m not saying that it is a must. That’s why you see after investing in properties and all that, after that I did not want to invest any more because as time changes, my thoughts change as well.”
He said he saw his properties as investments.

BMW appeared to be his favourite brand – he owned at least three of them.
Although he could not remember the first BMW he bought in Perth in 1998, it was black, according to the purchase form.

At one point in 2006, he had more than S$500,000 (RM1.22mil) in his bank account. A large part of this, he said, had been given to him by a devotee making a donation to the Singapore Buddhist Free Clinic.

But his lawyer, Senior Counsel Andre Yeap, pointed out that his client had made only one luxury purchase from 2001 to 2006 – an item from Hugo Boss costing more than S$560 (RM1,370).
The bulk of the credit card spending was apparently done by Yeung, who spent thousands shopping at Hermes, Louis Vuitton and Ermenegildo Zegna.

The court was also told that Ming Yi and Wee Beng Seng, an ex-treasurer of Ren Ci, were joint members of the Vines Golf & Country Club in Perth.

The court heard that during an outing at the Burswood Casino, also in Perth, two withdrawals of A$900 (RM2,600) were made one night. Ming Yi claimed that Wee had made the withdrawals.
He later said that Wee, a former drug addict whom he counselled at a drug rehabilitation centre in the 1980s, would make occasional trips to casinos when overseas, but that he was not a compulsive gambler.

Charity was close to his heart

While Ming Yi looked sheepish and at times exasperated when grilled about his lifestyle, he spoke passionately about another C – his charity.

After witnessing the public backlash from the National Kidney Foundation scandal in 2005, he did not wish the same fate to befall Ren Ci.

“Yes, I knew it was wrong (to cover up the loan) ... if there was a poisonous snake that crept into the building and a lot of people are there and the bite can kill, I might kill the poisonous snake,” he said.

“Although I was wrong, I was looking at the big picture of Ren Ci. I did not want any more harm to Ren Ci.

“Because in Buddhism, we are supposed to abstain from killing, we are not supposed to kill. But, however, to save more people, I would just have to kill the poisonous snake.”

DPP Singh said: “Were you looking after yourself?”

To this, the prosecutor said: “Now Venerable, I want to put it to you, your public persona is that you were selflessly committed to Ren Ci and Foo Hai Chan and you were anxiously trying to find monies.

“On the other hand, you were trying to hide your private persona, which is luxury living in Perth and two properties in Singa­pore.”

Did Ming Yi believe in luxury, DPP Singh probed the monk.
Ming Yi said he would be perfectly comfortable living in a village in Sri Lanka, China or Thailand.
“I think actions speak louder than words. The people in Foo Hai Chan, the people in Ren Ci would know what I’ve done.”

DPP Singh commented: “Indeed, your actions spoke louder than your words in Perth.”
The monk replied: “I had my flaws, yes, I agree, but that does not mean that I am not taking care of Ren Ci Hospital and Foo Hai Chan monastery.”