Magelang/Bandung (Indonesia) -- Buddhists across Indonesia observed Waisak on Tuesday with a message that religion can be a vehicle to enlighten people and the world. 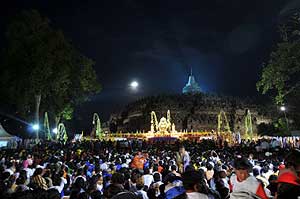 Followers in Magelang, Central Java, joined the solemn procession at the yard of the world heritage site — Borobudur Temple.

Sitting cross-legged, some 10,000 worshippers associated in the High Buddhist Council (Walubi) began the procession at around 6 p.m. with a meditation session for about 10 minutes under the full moon, led by Monk Wongsin Labhiko Mahathera.

“By meditating to remember Buddha, hopefully we will reach peace,” the monk said.

Walubi chairwoman Siti Hartati Murdaya said that the day of enlightenment was expected to bring humility to Buddhists in their search for peace and servitude for the people and the country.

“I also hope that harmony among Buddhists in Indonesia, who come from various sects, is created,” she said.

She also expressed hope that the celebration at Borobudur would help add to the history at the world heritage site, considering that the temple, which was believed to be built in the 8th century, did not just belong to Buddhists, but also to the global community.

“This will also help the government in the tourism sector and bring prosperity to the surrounding community,” she said.

The evening celebration was ended with prayers and a walking ritual. Participants circled the temple three times chanting parita. The peak of the celebration was the release of 1,000 lampions.

In the morning, thousands of Buddhists started the celebration by joining a long march ritual for some five kilometers from Mendut Temple to Borobudur Temple, carrying the sacred water and a flame for the celebration.

The parade started with a group of people carrying the flags of all the sects grouped under Walubi — the sacred flame, sacred water and dozens of local traditional performers, each holding tuberose flowers while chanting prayers.

In Bandung, West Java, more than 1,000 police officers were deployed to secure the Waisak celebrations.

West Java Budhayana Council chairman Ang Tiong Hin said that the celebrations carried a message about the need to model Sidharta Gautama’s teachings in everyday life so that the religion could bring enlightenment to people and to the world.

At a vihara in Jakarta, the celebrations were marked with the release of fish, as a symbol of doing good for other creatures.

“In releasing the animals, we have to make sure that they will not get caught,” congregation member Hasan, 44, said.

Three buckets of fish, such as catfish, snakehead murrel and eel were in the center of the room inside the Cetiya Dhamma Manggala Vihara, a Buddhist monastery, at Sunter. Four bhante (Buddhist monks) sat on one side of the buckets with great calmness, while others sat enthusiastically opposite their leaders.

They solemnly chanted a prayer, while a monk blessed the people by spraying them with water using a bamboo brush.