Yogyakarta, Indonesia -- The wave of Buddhism that spread from India to South East Asia around the first century AD lasted several centuries when many of the countries came under the Buddhist influence, with numerous temples and stupas springing up all over. 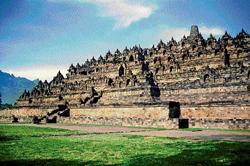 Indonesia, the largest archipelago in the world, too passed through a spell of Mahayana Buddhism, and it was more pronounced in Central Java, thanks to patronisation by rulers of the Sailendra Dynasty reigning at the time. One of their legacies was a huge Buddhist temple at Borobudur near Yogyakarta.

Though no written records about the date and purpose of its construction were available, it has been established, from a study of the relief panels and inscriptions of the temple discovered during excavations, that the structure was indeed built between eighth and ninth centuries by the kings of the Sailendra Dynasty. What was intriguing about the structure was whether it was built to be a temple or a stupa.

While the temple is mainly a place of worship entered by pilgrims, a stupa is a closed structure where Buddhist relics are kept, usually buried in a container at the base. The monument at Borobudur, as it has been interpreted, is both a temple and a stupa. Built in the shape of a stupa with a large number of miniature stupas all around, it is also a temple with stairways and corridors, niches, wall panels and images.

The area where the temple stands now is guarded by twin volcanoes of Sumbing and Sundoro on one side, and Merapi on the other, which have been erupting off and on. The plateau between them called Kedu Plains is not only enriched with volcanic ash, but fed by two rivers Progo and Elo, and a lake, making it a very fertile tableland nicknamed ‘The Garden of Java’.

The place was considered sacred by the Buddhists, who decided to build a massive stupa on a high mound to symbolise the lotus flower. So it was around 750 AD that the work on the stupa commenced. The meticulously planned construction process of the towering structure went on for as long as 75 years and culminated in 825 AD during the time of King Samaratungga.

The stupa is a colossal structure, built on a large square base with nearly 400 ft each side. There are nine platforms one above the other, the first six being square ones and the top three being circular. The whole structure has been built in such a way as to symbolise the cosmic levels one undergoes to attain purity and salvation. The first platform at the base represents Kamadhatu, a world of desires. The next five tiers are the Rupadhatu, the world of forms.

The three circular platforms and the stupa at the top together symbolise Arupadhatu, which signifies a world of formlessness. The platform at the base was hidden initially and was discovered only in 1885, and as such referred to as ‘the hidden foot’. It was found to have 160 panels narrating the meaning of Kamadhatu. In higher platforms are intricate base-relief panels, which depict events from the life of commoners, kings and queens, Gandharvas and Apsaras.

At the next level of Arupadhatu, the world of formlessness, the panels are plain and devoid of decoration. There are 2,672 relief panels in all and 504 Buddhas besides innumerable images. A labyrinth of stairs and corridors lead the way up to the top, dominated by a huge stupa encircled by 75 smaller stupas. The stupas are bell-shaped with latticed openings, with an image of a Buddha sitting inside, in the lotus posture. But the main stupa is empty.

Towards the 11th century, as Buddhism declined and the capital moved towards the east, probably to escape the repeated eruptions from volcanoes, Borobudur went into oblivion. It lay buried in a time warp for centuries under a heap of ash, and was rediscovered only in early 19th century.

The credit for bringing it to the knowledge of the world yet again undoubtedly goes to Sir Thomas Stamford Raffles, the then ruling British Governor General. Later on, after decades of repeated restoration, UNESCO lent great support in a massive overhaul of the whole structure, eventually declaring it as a World Heritage site in 1991. As recently as June this year, the ancient monument has also been included in the Guinness Book of World Records as the largest Buddhist temple in the world.