Borobudur: A Reminder of Indonesias Buddhist Past

Jogjakarta, Indonesia -- In the misty jungles of Central Java’s Kedu Valley, builders in the 8th and 9th centuries hauled 2 million stones from rivers and streams to erect Borobudur, a dazzling, 95-foot-tall, 55,000-square-meter step pyramid and Buddhist temple complex. Today, it serves as a reminder that a Buddhist kingdom, the Syailendra Dynasty, thrived for around five centuries (until the 10th century) in the heart of what is now Indonesia.

This would seem unlikely today, given the nation’s status as the world’s largest Muslim nation, but the Borobudur Temple compound (a UNESCO World Heritage Site) is in fact the world’s largest Buddhist monument. The temple’s historical significance is matched by its architectural grandeur, which is made all the more dramatic by views of steaming Mount Merapi, an active volcano that erupted as recently as 2010.

“Borobudur stands with Angkor in Cambodia, Lalibela in Ethiopia and Istanbul’s Hagia Sophia, among the finest treasures of the world’s religions,” wrote Buddhist scholar Stephen Bachelor. “It’s considered an essential stop for anyone who visits Java, whether jaunting from nearby Yogyakarta or moving slowly through the island heading for Bali and paradise islands beyond. It remains – far more so than many holy places around the region and the world – a place of pilgrimage and prayer.”

Built in three tiers, the temple’s layout has a pyramidal base with five concentric terraces, above which a layer of three circular platforms lined with 72 stupas – each containing a statue of the Buddha – lead up to a massive stupa at the top. An aerial view of the magnificent structure can be seen here and photos of it are here. 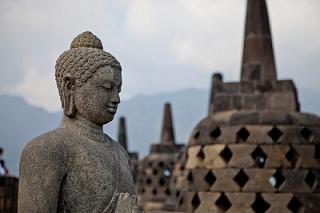 Borobudur’s vertical organization reflects Buddhist cosmology, according to which the universe is divided into three superimposing spheres: kamadhatu (desire), rupadhatu (forms) and arupadhatu (formlessness). Kamadhatu is embodied in the pyramidal base, while the five square terraces at the temple’s mid level represent rupadhatu and the upper five circular platforms and crowing stupa correspond to the formless void from which all forms and desires emanate. Circumambulating the temple’s terraces while chanting and meditating is a devotional practice.

Its similarity to a terraced mountain, notes UNESCO, the design of the structure harkens back to the island’s ancient tradition of ancestor worship, and is combined with the Buddhist ideal of attaining – ascending to – Nirvana.

With the introduction of Islam to the island, which is now 96 percent Muslim, Borobudur was largely abandoned following the decline of the Syailendra Dynasty. It came back into the world’s eye when the site was “rediscovered” by a Dutch engineer dispatched by Singapore founder Thomas Stamford Raffles in the 19th century and was restored to its past glory with help from UNESCO in the 20th. Today it is a vital destination for tourists and archeologists alike.

For many, the site’s inherent heritage value holds the key to further developing Indonesia’s economy, according to The Jakarta Post, which touts Borobudur as one of Indonesia’s hottest destinations.

For ancient sites, however, earning a spot on the well-trodden tourist path is a double-edged sword, added Bachelor: “With the growth of mass travel these and other temples and churches have become more than places of pilgrimage for the faithful. Tourists come to these places as well as believers – often in great numbers.”

The challenges were highlighted during the Waisak celebrations (for the Buddha’s birthday) held at Borobudur last month, during which spectators reportedly showed a lack of respect for religious celebrants.

For Bachelor, the pros of visiting still outweigh the cons: “But for those who can visit, sites like Borobudur… become real places with a place in modern society, and visitors hopefully gain a connection to and curiosity for the past, and an understanding of the value of preserving special places for future generations.”