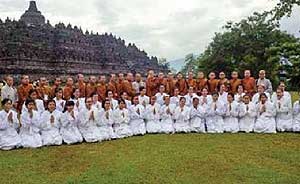 From the event’s press release: “The theme will set the stage for participants from all over Indonesia and around the world to draw connections between spiritual cultivation, social transformation, and gender justice. […] Buddhist women are frequently excluded from the processes that shape their communities, such as negotiations among governments, scholarly forums, religious leaders, and social structures. Decision makers are often unfamiliar with Buddhist women’s contributions, while Buddhist women may remain disconnected from the larger issues that affect their daily lives. The 14th Sakyadhita Conference will be an opportunity for dialogue about how compassion and spiritual development can help shape a more just and peaceful world.

Indonesia is home to some of Asia’s oldest Buddhist cultural monuments, dating back as early as the 5th century.