Jakarta, Indonesia -- President Susilo Bambang Yudhoyono said the government was under obligation to protect every religion and all their adherents in the contry from being tarnished by irresponsible elements. 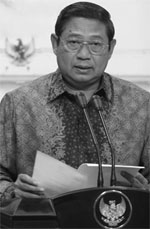 "The government has to protect every religion and thus, adherents of different religions should respect each other and the existing differences," Yudhoyono said in his address at the opening of the 2nd National Congress of the Indonesian Buddhist Community (Walubi) at the Jakarta Fair grounds here on Friday.

Yudhoyono said that therefore he attached great importance to the joint decree of the religious affairs and home affairs ministers about maintaining inter-religion harmony and establishment of houses of worship.

"I think the joint decree of Religious Affairs Minister Maftuh Basyuni and Home Affairs Minister Mohamad Ma`ruf is a very strategic one," the President told approximately 1,200 participants of the Walubi congress.

On the occasion, the head of state asserted that one religious group should not ever try to block the dynamics of the other group because diversity is the typical characteristic of Indonesian nation.

"Lest one particular group block the dynamics of the other group," the president said in the congress which was also attended by the House of Representatives (DPR) deputy Speaker Soetardjo Soerjogoeritno, Religious Affairs Minister Maftuh Basyuni and Walubi chairperson Siti Hartati Murdaya.

Yudhono warned that the different faiths, cultural background and tradition that make up the diversity in the country should pave the way to common interest.

Commenting on globalisation and reform that had overwhelm the world, Yudhoyono said one of their characteristics was "freedom."

"We are living in reform and globalization era, and the charcteristics of the globalization and reform are democratisation and freedom but freedom itself should not be a threat to other religious group," Yudhoyono said.