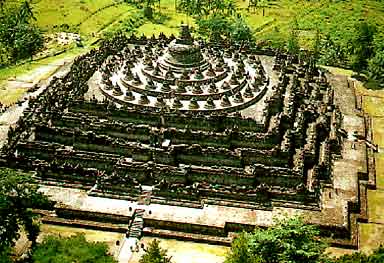 Some damage was reported at Indonesia's biggest Hindu temple compound, the ancient Prambanan complex that is also on Java island.

A mass of forbidding black stone, Borobudur was built in the 7th century by the Javanese rulers of the Syailendra dynasty and is one of Indonesia's most popular tourist attractions, drawing millions of people every year.

Lying 25 miles northwest of Yogyakarta, a city badly damaged by the magnitude-6.2 quake, Borobudur appeared to escape damage, said Kuntung, a district official who like many Indonesians goes by one name.

Borobudur was abandoned for unknown reasons, and lay hidden for centuries under volcanic ash and jungle growth until it was discovered in 1814 by Sir Thomas Stamford Raffles during the English occupation of Java, the cultural and population center of modern-day Indonesia.

An extensive restoration was carried out in the 1970s under the guidance and financing of UNESCO.