JAKARTA, Indonesia -- Hundreds of people protested in Jakarta Wednesday against the local branch of the Buddha Bar chain, demanding its closure and saying it threatened interfaith relations. 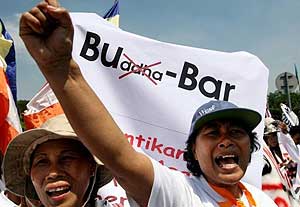 << Protestors gather outside the Buddha Bar in Jakarta demanding its closure

About 300 people from a group calling itself "People's Alliance to Close Buddha Bar" gathered in white shirts outside the bar, shouting "Close Buddha Bar right now".

The plush lounge bar and restaurant, a franchise of the French-based chain, faced a series of demonstrations last year from enraged members of Indonesia's Buddhist minority who considered the name an insult to their religion.

It adjusted its name to "Buddhabar" but that failed to quell the protests.

Elly said the group demanded that the government immediately close the bar -- known for its trademark lounge music and Oriental design -- because it had been mired in religious controversy since it opened in late 2008.

"Although I'm a Christian, I feel that the name of the bar has defamed Buddhism as a religion. The government should close the bar, then change its name if they want to re-open it," he said.

Elly said they had also protested outside the French embassy, urging the French government to pressure the chain, which is owned by the George V Eatertainment group, to revoke the licence of the Indonesian franchise holder.

"The bar has tarnished the good name of Buddha. There are prostitutes hanging out there, and that cannot be forgiven," university student Catur Setiawan said.

Setiawan, a 22-year-old Buddhist, said the presence of Buddhist statues in the bar insulted his religion. A five-metre (15-foot) statue of a golden sitting Buddha gazes over its main dining area.

French ambassador Philippe Zeller said the embassy was not able to give an opinion on a commercial issue regarding an Indonesian company.

"I told them that we understand the emotion that they have expressed today," Zeller said after receiving a delegation of three demonstrators.

The bar's management could not immediately be reached for comment.