Jakarta, Indonesia -- A Buddhist group that backed the city in allowing the Buddha Bar to open will file a complaint against judges at the Central Jakarta District Court who ordered the bar closed and fined the owners Rp 1 billion ($112,000). 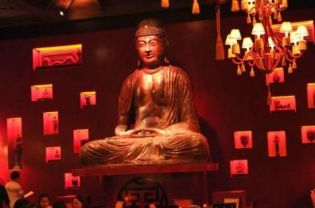 << A large statue of the Buddha dominates the bar and dining area at Jakarta’s Buddha Bar.

Lieus Sungkharisma, the chairman of the board of supervisors at Gemabudhi, or Indonesian Buddhist Youths, said on Wednesday his organization would file the complaint with the Judicial Commission.

Lieus accuses the judges of ruling unfairly against the bar’s owners, Nireta Vista Creative, as well as Jakarta Governor Fauzi Bowo and the Jakarta Tourism Agency.

The move comes three weeks after the court ordered the bar to close immediately. Judge FX Jiwo Santoso ordered the owners to pay Rp 1 billion to the Anti-Buddha Bar Forum, or FABB, for “mental distress.”

Gemabudhi pointed out that the figure was twice the amount demanded by the plaintiffs.

“That is troubling. We are not disputing anything else, but that,” Lieus told the Jakarta Globe. Citing Indonesian civil law and 1970 Supreme Court jurisprudence, Lieus said the judge should not have gone beyond the parties’ claims.

Lieus said it was impossible for the judges not to know of this. “This is why we would like the Judicial Commission to investigate the matter,” Lieus said.

Established to monitor the performance of judges and to ensure impartiality in courts nationwide, the Judicial Commission is mandated to interrogate judges over irregularities in verdicts and recommend punishment, which could range from warning letters to dismissals.

Commission official Zainal Arifin agreed such cases should be reported. “It’s like giving a defendant the death sentence even though the prosecutor didn’t ask for it,” he said.

The Anti-Buddha Bar Forum has fought the bar’s use of the Buddha’s name and the use of Buddhist decorations for a commercial venture. The bar, part of an international chain, opened in Jakarta in 2008.

Throughout the hearings, the Betawi Brotherhood Forum (FBR) and the Red-and-White Troops (Laskar Merah Putih), organizations known for their aggressive behavior, turned up to jeer witnesses testifying for the city and the Buddha Bar.

The judges found Nireta Vista Creative guilty of blasphemy and violating laws, including those concerning business and tourism, that mandate respect for state-sanctioned religions, and therefore had to stop operating.

Fauzi and the tourism agency were found guilty of having allowed the company to operate the bar.

“The [governor] did not respond proactively and the agency failed to consider religious and cultural development in society, and ended up offending them,” Jiwo said in the ruling.

Lieus also claimed on Wednesday that FABB was guilty of violating certain rules of Buddhism, including blackening the names of Buddhists who failed to follow their lines of thought.

FABB, through its lawyer, has tried to discredit Gemabudhi as a minor organization that has failed to secure recognition and acknowledgement from bigger Buddhist organizations in Indonesia, like Walubi.

“If you read their Facebook page or even their Web site, it is filled with invectives towards us, our monks and the government,” Lieus said.

“They call us traitors of Buddhism. They accuse us of being Buddha Bar’s henchmen.

“There are other Buddhist organizations that don’t mind the Buddha Bar, but the way FABB terrorizes them, it makes them reluctant to step up.”