What is the Kalachakra?

FALLS CHURCH, VA (USA) -- On Faith asks, “The Dalai Lama will preside over the Kalachakra ritual at the Verizon Center. What is the Kalachakra?” 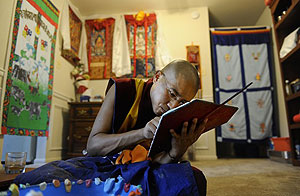 << JUNE 24: Kunga Gyatso makes a butter sculpture ritual offerings for next month's 10-day long Kalachakra for World Peace ceremony at a friends home on Friday, June 20110624, 2011 in Falls Church , VA. The purpose of the offerings are intended to be edible and take up to a week to make. The festival will take place July 6 to the 16th. During the first three days of the Kalachakra, the Dalai Lama, along with the monks of Namgyal Monastery and senior lamas, will conduct rituals which prepare and consecrate the venue. (Amanda Voisard - THE WASHINGTON POST)

Tantric Buddhism, which can also be called Vajrayana, is the principal stream of Buddhism in Tibet, Bhutan, and Mongolia (whereas, generally speaking, Theravada Buddhism predominates Sri Lanka, Cambodia, Thailand, and Burma, and Mahayana Buddhism is prevalent in China, Vietnam, Japan and Korea). Tantra is based on the principle of the transformation of impure perception into pure perception. Utilizing visualization of deities and mandalas (more on mandalas here), recitation of sacred syllables known as mantra, and meditation brings about such pure perception. It is believed that through such practices, one’s ordinary outlook can be fundamentally transformed into a ‘sacred perception,’ where all sights, sounds and even thoughts, are experienced purely in their true nature.

To practice the Kalachakra, as with all tantric teachings, consistent guidance by a qualified master is required. Central to this guidance is an empowerment, or initiation, into the various visualizations of deities and mandalas, mantra recitation and all associated practices. Empowerment is analogous to the manner in which an unlit candle is poised to illuminate a dark room but requires the condition of another flame. In a similar manner, when a qualified master conducts an empowerment, the student’s spiritual potential can be ignited which allows their indwelling wisdom and compassion to shine forth.

Sometimes Kalachakra refers to the specific tantric deity. Kalachakra is a widely studied and practiced deity in Tibetan Buddhism. Tantric deities, of whom there is a wide variety, are believed to represent various aspects of the enlightened mind. For example, the Dalai Lama is said to be the human manifestation of the tantric deity, Avalokiteshvara, commonly referred to as the Buddha of Compassion. Practitioners of a specific tantric deity utilize complex visualization, mantra recitation, and concentration, to cultivate positive inner qualities in such as way that they will become manifest for the benefit of others.

----------------
Matteo Pistono, author of recently released “In the Shadow of the Buddha: Secret Journeys, Sacred Histories, and Spiritual Discovery in Tibet” will be contributing to On Faith during the Dalai Lama’s visit to Washington D.C., and tweeting from the Verizon center (Twitter: @matteopistono).