The Buddhist art of nonjudgmental judging is subtle

The Dalai Lama refused to judge the food on MasterChef, but it is a mistake to assume that Buddhists view all judging as bad

London, UK -- The reality television program MasterChef Australia made news when the Dalai Lama agreed to appear as a guest judge. But while His Holiness clearly enjoyed some of the dishes – particularly the yummy Sri Lankan vegetarian curry – he refused to render judgments: "As a Buddhist monk it is not right to prefer this food or that food," he said. 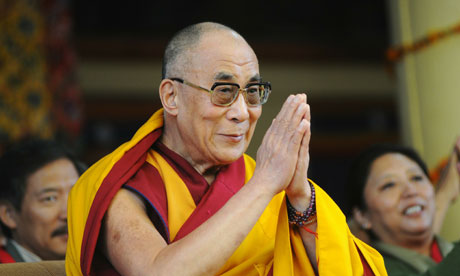 << The Dalai Lama's refusal to judge the food on MasterChef Australia is part of the Buddhist tradition of equanimity. Photograph: Strdel/AFP/Getty Images

Why not judge the food? Maybe His Holiness didn't want to hurt anyone's feelings. It is also an ancient rule for Buddhist nuns and monks to eat whatever food they are given as alms, without judging whether it is tasty or not. And that takes us to the issue of likes and dislikes.

You may have heard the Buddha taught that life is suffering, and suffering is caused by desire. Updated to modern terms, what the Buddha taught is that we're all twitching masses of greed, insecurity and social programming. We hurtle through our lives grasping at whatever we think will soothe our existential angst while batting away whatever hurts us or pushes our ego buttons. And as we do this we cause a lot of trouble for ourselves and for those around us. There is a 6th-century Chinese text of the Chan (Zen) school that says: "To set up what you like against what you dislike is the disease of the mind." Very simply, sorting all phenomena into "like" or "dislike" bins gets in the way of enlightenment.

To be free, the Buddha said, we must first thoroughly perceive the illusory nature of all the things that jerk us around, including likes and dislikes, which brings us back to why the Dalai Lama might have thought it inappropriate to choose one dish over another in a reality cooking show. But the dharma of judgments is subtle. It's a common mistake to assume that all judging is bad, which in itself is a judgment. If I call attention to a teacher's misbehaviour or pan a boneheaded book on my Buddhism website, someone is bound to chide me for being judgmental. But to judge someone else as judgmental is, well, judgmental. There's no escape. The historical Buddha himself sometimes criticised the teachings of the Brahmins of his day, which means he judged they were wrong.

The path of liberated judging is found in the practice of "upekkha," a Pali word (it's "upeksa" in Sanskrit) that means "equanimity" or "nonattachment" (some early English translations of the Pali texts rendered the word as "detachment", which is wrong, but that's another lecture).

The word has a connotation of seeing from a high place to take in the whole view. In practice, it means to walk freely between attraction and aversion, likes and dislikes, praise or blame, without attaching to one side or another, and without being jerked this way or that. However, it does not mean to walk by someone doing harm to others – putting a child in danger, for example – when you can step in and stop it. Sometimes judgments must be made.

Maintaining equanimity can seem like walking a tightrope. Lean one way, and you're a moralising busybody. Lean the other way, and you're an enabler. And above all, you have to keep your ego out of the way. This is not a discipline that can be mastered in three easy steps. It takes practice, insight and a lot of falling down and getting up again. Mentoring by someone further along the path is enormously helpful.

However, after looking at recipes on the MasterChef Australia website, I can say I would not be averse to being a judge. Choosing between the pumpkin risotto and the black sesame dumplings looks like my kind of spiritual challenge.