by the late Roshi Robert Aitken, The Buddhist Channel, September 11, 2011

The late Roshi Robert Aitken delivered this memorial at Hilo Hongwanji on Sept 11, 2003

Honolulu, Hawaii -- Today we gather to remember the 2,800 people who died in the World Trade Center tragedy two years ago, and those who died at the Pentagon and in the four airplane crashes that day. As human beings, as Buddhists, we value each life, and the loss of so many lives in unprecedented acts of violence is deeply disturbing. 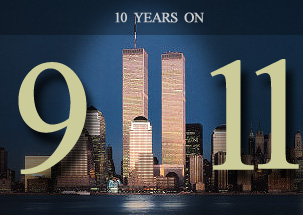 I bow and offer incense to the departed ones. May those who died, and may their loved ones too find rest and reconciliation. I vow to requite the deaths and the bereavements as the Buddha and his noble successors might do in my place. This is my task, and I seek to share the terms of that task with you this morning.

The murderer with gun or knife does not have a compassionate and global view, and there are 15,000 murders in the United States each year, three times the number who died that day in New York and Washington and Virginia.

The automobile driver who is drunk or careless does not have a compassionate and global view, nor do automobile manufacturers who weigh the costs of compensation when deciding upon safety equipment. And there are more highway fatalities in the US each month than the total number who died at the World Trade Center, the Pentagon, and the four downed airliners.

The Buddhist view of global compassion applies also to systems of economy, politics, and religion. The terrorists who took their own lives in the course of destroying the World Trade Center are martyrs to many of their Muslim colleagues.

We can be sure that as they flew the airliners to destruction they were shouting, "God is great!" They were true believers, and were guiding their planes to the very heart of the conspiracy that was, they felt, intent upon destroying their culture and religion, a conspiracy that has its roots deep in history, back a thousand years to the First Crusade. Of course, we tend to look at things very differently. It is as though a curtain divides us from their views and ours. But the Buddha would say, I think, that the curtain itself is an illusion, a creation of Mara, the Destroyer.

Fundamentalist Muslims destroyed the World Trade Center towers and the lives of 2,800 people working there. But our side has its fundamentalists too. You destroy our skyscrapers; we destroy your cities and your civilization.
There is surely another way.

Some of the folks who lost loved ones in the tragedy two years ago have organized as the "September 11th Families for Peaceful Tomorrows." A spokeswoman, Terry Rockefeller, was quoted in the Boston Globe last March as saying, "[With] the first images of the bombs falling on Baghdad, all I could imagine was the creation of the kind of destruction that I saw at Ground Zero." She and other members of the group made a symbolic gesture and traveled to Iraq earlier in the year.

"We were ordinary citizens, people who had had an extraordinary experience going there meeting with ordinary Iraqi citizens making a signal that war didn't have to happen," Rockefeller said. She said that she was not supportive of the regime of Saddam Hussein, but was strongly opposed to the U.S. policy, saying, "We feel especially pained that the war seems to get justified in the name of September 11."

So then what is our position as Buddhists? A bumper sticker you see from time to time reads, "What would Jesus do?" I don't think religion has a place on bumper stickers or billboards, but the challenge is an interesting one. For us it would be, what is the compassionate and global way? When you think about it, this is actually quite a radical question, even dangerous to our place in conventional society, but surely it must be faced if we are to survive as a human race, for the way of the Three Poisons, greed, hatred and ignorance, just isnÕt working.

You and I are not Gandhi or Martin Luther King or Dorothy Day, but we are still responsible individuals. We can talk to our friends. Our friends can talk to their friends and so on out like circles on a pond.

Now my time is up and I must close, Commonly Buddhists end their talks by saying, "May all beings be happy."I'd like to end mine a little differently. "May I make happiness possible for all beings."And may you make it possible. Let's do it together.