Can population growth be reconciled with Buddhist reincarnation? 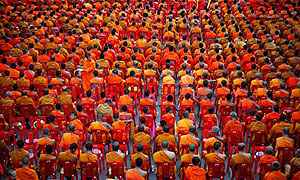 The idea of reincarnation is commonly thought of as "one-out-one-in"– you die and then you get reborn somewhere else. That's not at all how it's perceived in Buddhism: one of the hallmarks of the Buddhist teaching is a refutation that there's any permanent self or soul that could endure from lifetime to lifetime. This is such a different view to the one above that most Buddhists prefer not to use the word reincarnation at all, opting instead for something like "rebirth" or "rebecoming".

The Buddha taught that all things are impermanent, in a state of continuous change and flux – and this includes us. We're constantly mutating as we grow, develop, age and decay, and what we tend to think of as "myself" is actually an ever-changing heap of body parts, thoughts and feelings, influenced by a vast range of past and present causes and conditions (family and cultural history, environment, schooling, biology and so on). Ask yourself: are you the same person you were when you were five years old? The same person as five years ago? Five minutes ago? If not, then aren't we being born and dying in every moment?

The Buddhist doctrine of rebirth (and this is where we'll probably part company with a lot of people) proposes that this extends beyond our current lifespan on this planet – consciousness is seen as unbound by bodily form, and so will re-emerge in other aggregations, even in other worlds. In this scenario, there would be no reason why the number of people on earth has to remain constant, and several explanations for population growth arise: 1. Life previously expressed in other forms (animals, or insects, say) might now be taking human birth. 2. There could be an influx of energy from other planets, realms, universes – a kind of cosmic migration. Or 3. "Human" consciousness could manifest as a greater number of people than it did before. It's a bit like waves in the sea – different numbers and types of wave arise and dissolve depending on the weather conditions and the flow of water.

However, trying to hammer this out like some metaphysical maths problem isn't really in the spirit of Buddhism. Belief in rebirth (or any other doctrine, for that matter) is considered much less important than insights that come from carefully investigating the nature of phenomena as they are, here and now. Not knowing, not latching on to a solid belief, might be more helpful in making this an investigation without prejudice. The Buddha also generally discouraged speculation on questions such as whether there's life after death, comparing this with someone who'd refuse to have a poisoned arrow removed from their body until they knew who shot it, what kind of bow they used and what the feathers of the arrow-shaft were made of. "The man would die and those things would still remain unknown to him," he said. A fair point, no?

Instead, a focus of Buddhist practice is on deep, embodied realisation of the insubstantiality of incarnation in this moment, from the view that it's grasping to a nonexistent fixed self that heightens our stress and suffering, and stops us connecting compassionately with others. All the rest is fiddling while Rome burns …