What I Saw Outside the Dalai Lamas House

Speakeasy reporter Barbara Chai is traveling to Dharamsala, India, this week for a private audience with His Holiness the Dalai Lama.

Dhramsala, India -- After a marathon flight, we finally arrive in Dharamsala, home of His Holiness the Dalai Lama. I won’t lie: the first few hours are a bit of a blur because I am mentally and physically exhausted. 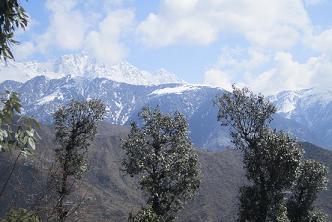 << The view of the Dhauladhar Himalayas from just outside the Dalai Lama’s residence.

Add to that my attempts to heed the advice given by everyone I spoke to about traveling to India: It’s a lovely country but don’t drink the water, don’t take ice, don’t order salads, don’t eat from street stalls. Then when we take a walk, there are enormous cows and honking minivans and beeping scooters to contend with on a narrow dirt road. It’s charming and jarring in the best way - I’m just saying, it’s a lot to take in at first.

But after the most glorious night’s sleep in the peace of Kashmir Cottage - a guesthouse owned and run by the brother and sister-in-law of His Holiness the Dalai Lama - I’m more than good to go. We venture out after breakfast to find the Dalai Lama’s residence up a steep, rocky path behind the cottage.

There are monks and pilgrims circumnavigating his residence on the kora, or walking meditation path, which includes a breathtaking stupa, miles of prayer wheels, and mani stones - rocks that are inscribed with the mantra, “Om mani padme hum,” which means “Praise to the Jewel in the Lotus.” This is the mantra of Chenrezig (Sanskrit name: Avalokiteshvara), the bodhisattva, or Buddhist deity, of compassion. Tibetan Buddhists believe His Holiness the Dalai Lama is the earthly manifestation of Chenrezig. A man who is the reincarnation of a deity of compassion.

When we practice Chan Buddhism at home, my family and I pray to the same bodhisattva (we envisage her as female, even though this bodhisattva’s gender can vary with different schools). In Chinese her name is Guanshiyin Pusa and she is our goddess of compassion. I chant her name and turn the beads. I pray to her for protection and mercy. To me, Guanshiyin is Buddhism.

So, to encounter Tibetan Buddhists’ fervent devotion to the same bodhisattva, and to learn that they regard their spiritual leader, the Dalai Lama, as its earthly manifestation, seems entirely fitting. At the same time, even though we’re talking about the same religion, Tibetan Buddhism is still very different from Chan Buddhism in practice, and so an immediate connection to such an important Buddhist deity for both of us also seems coincidental.

As if I needed another reason, I am now even more excited about meeting His Holiness the Dalai Lama in person. How to regard him as just that, a person? Because he is human too. His face is on photographs all over Dharamsala, and I see His Holiness as a young man arriving to India in 1959. I see His Holiness petting cute dogs. I see His Holiness wearing a visor to protect his eyes from the sun. He likes to give hugs. He doesn’t suffer fools. Above all, he is kind. Maybe all of this is what is meant by being human, by being earthly.