Nagarjuna and Quantum physics: Eastern and Western Modes of Thought

Christian Thomas Kohl dissects key terms in the teachings of Nagarjuna and transposes these ideas with Quantum Physics. The following is a summary of his thesis on the subject. 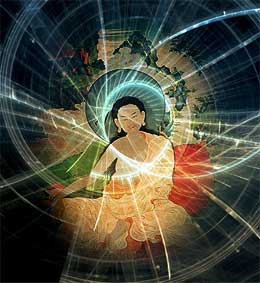 1. Key term: ‘Emptiness’. The Indian philosopher Nagarjuna ( 2nd century BC ) is known in the history of Buddhism mainly by his keyword ‘sunyata’. This word is translated into English by the word ‘emptiness’. The translation and the traditional interpretations  create the impression that Nagarjuna declares the objects as empty or illusionary or not real or not existing. What is the assertion and concrete statement made by this interpretation? That nothing can be found, that there is nothing, that nothing exists? Was Nagarjuna denying the external world? Did he wish to refute that which evidently is? Did he want to call into question the world in which we live? Did he wish to deny the presence  of things that somehow arise?  My first point is the refutation of this traditional translation and interpretation.

2. Key terms: ‘Dependence’ or ‘relational view’. My second point consists in a transcription of the keyword of ‘sunyata’ by the word ‘dependence’. This is something that Nagarjuna himself has done. Now Nagarjuna’s central view can be named ‘dependence of things’. Nagarjuna is not looking for a material or immaterial object which can be declared as a fundamental reality of this world. His fundamental reality is not an object. It is a relation between objects. This is a relational view of reality. Reality is without foundation. Or: Reality has the wide open space as foundation.

3. Key terms: ‘Arm in arm’. But Nagarjuna did not stop there. He was not content to repeat this discovery of relational reality. He went on one step further indicating that what is happening between two things. He gave indications to the space between two things. He realised that not the behaviour of bodies, but the behaviour of something between them may be essential for understanding the reality. This open space is not at all empty. It is full of energy. The open space is the middle between things. Things are going arm in arm. The middle might be considered as a force that bounds men to the world and it might be seen as well as a force of liberation. It might be seen as a bondage to the infinite space.

4. Key term: Philosophy. Nagarjuna, we are told, was a Buddhist philosopher. This statement is not wrong when we take the notion ‘philosophy’ in a deep sense as a love to wisdom, not as wisdom itself. Philosophy is a way to wisdom. Where this way has an end wisdom begins and philosophy is no more necessary. A.N. Whitehead gives philosophy the commission of descriptive generalisation. We do not need necessarily a philosophical building of universal dimensions. Some steps of descriptive generalisation might be enough in order to see and understand reality. There is another criterion of Nagarjuna’s philosophy. Not his keywords ‘sunyata’ and ‘pratityasamutpada’ but his 25 philosophical examples are the heart of his philosophy. His examples are images. They do not speak to rational and conceptual understanding. They speak to our eyes. Images, metaphors, allegories or symbolic examples have a freshness which rational ideas do not possess. Buddhist dharma and philosophy is a philosophy of allegories. This kind of philosophy is not completely new and unknown to European philosophy. Since Plato’s allegory of the cave it is already a little known. (Plato 424 – 348 BC) The German philosopher Hans Blumenberg has underlined the importance of metaphors in European philosophy.

5. Key terms: Quantum Physics. Why quantum physics? European modes of thought had no idea of the space between two things. They were bound to the ideas of substance or subject, two main metaphysical traditions of European philosophical history, two main principles. These substances and these subjects are two immaterial bodies which were considered by traditional European metaphysics as lying, as a sort of core, inside the objects or underlying the empirical reality of our world. The first European scientist who saw with his inner eye the forces between two things had been Michael Faraday (1791-1867). Faraday was an English scientist who contributed to the fields of electromagnetism. Later physicists like Albert Einstein, Niels Bohr, Erwin Schrödinger, Werner Heisenberg and others followed his view in modern physics. This is a fifth point of my work. I compare Nagarjuna with European scientific modes of thought for a better understanding of Asia. I do not compare Nagarjuna with European philosophers like Hegel, Heidegger, Wittgenstein. The principles and metaphysical foundations of physical sciences are more representative for European modes of thought than the ideas of Hegel, Heidegger and Wittgenstein and they are more precise. And slowly we are beginning to understand these principles.

Let me take as an example the interpretation of quantum entanglement by the British mathematician Roger Penrose. Penrose discusses in the year of 2000 the experiences of quantum entanglement where light is separated over a distance of 100 kilometers and still remains connected in an unknown way. These are well known experiments in the last 30 years. Very strange for European modes of thought. The light should be either separated or connected. That is the expectation most European modes of thought tell us. Aristotle had been the first. Aristotle (384  - 322 BC) was a Greek philosopher, a student of Plato and a teacher of Alexander the Great. He told us: Either a situation exists or not. There is not a third possibility. Now listen to Roger Penrose:

“Quantum entanglement is a very strange type of thing. It is somewhere between objects being separate and being in communication with each other” (Roger Penrose,  The Large, the Small and the Human Mind, Cambridge University Press. 2000 page 66). This sentence of Roger Penrose is a first step of a philosophical generalisation in a  Whiteheadian sense.

6. Key terms: ‘The metaphysical foundations of modern science’ had been examined  particularly by three European and American philosophers: E. A. Burtt, A.N. Whitehead and Hans-Georg Gadamer, by Gadamer eminently in his late writings on Heraclitus and Parmenides. I try to follow the approaches of these philosophers of anti-substantialism. By ‘metaphysical foundations’ I do not understand transcendental ideas but simply the principles that are underlying sciences.

7. Key terms : ‘Complementarity’, ‘interactions’, ‘entanglements’.  Since 1927 quantum physics has three key terms which give an indication to the fundamental physical reality: Complementarity, interactions and entanglement. These three notions are akin to Nagarjuna’s relational view of reality. They are akin and they are very precise, so that Buddhism might learn something from these descriptions and quantum physicists might learn from Nagarjuna’s examples and views of reality. They might learn to do a first step in a philosophical generalisation of quantum physical experiments. All of us we might learn how objects are entangled or going arm in arm.

Chapter 12: Suffering and the causes of suffering. Commentary: Suffering is not independent from a cause of suffering and not identical with its cause. There can be no cause without an effect, or an effect without a cause. The notion ‘cause’ has no meaning without the notion ‘effect’. Cause and effect are not one, but they cannot be separated into two independent notions either. Like suffering reality does not consist of single, isolated material or immaterial components; suffering arises only by dependence on other causes. Like everything in this world suffering and its (here at this picture invisible) cause are not one and they are not two different objects. [page 20. Christian Thomas Kohl. Nagarjuna and Quantum Physics]

----
Christian Thomas Kohl has studied Political Science and the Philosophy of Science at the University of Berlin. He has studied Indonesian and Indian music and has promoted music from India, Pakistan, and Tibet. Most of his time over the past three decades, he has spent reconciling the fundamental concepts and principles of quantum physics and Buddhist philosophy. He belongs to the Sakya tradition of Tibetan Buddhism. http://ctkohl.googlepages.com