Back to Jail in Burma

YANGON, Myanmar -- Today I go back to Insein Prison, where I was detained in the late 1990s and where throughout the decades of military rule in Myanmar, most political opponents were interrogated, tried and held. 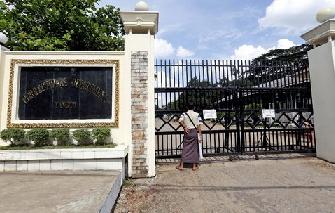 I was taken there directly from my home in 1998, as a 20-year-old university student, and was given a 21-year sentence on charges of distributing subversive pamphlets. I served seven years, in Insein and two other prisons, before being released in a general amnesty in 2005.

Now I am heading back, as a volunteer in a 10-day Vipassana meditation course for prisoners.

As the day approached, I felt at times overwhelmed at the prospect of seeing so much misery again. But mostly I felt excited. Since my release eight years ago I have thought recurrently that while prison is a human hell, it offers exceptional opportunities for inner peace by creating, if forcibly, a haven from the distractions of ordinary life.

Living conditions at Insein 15 years were tough. We were locked in our cells all day — many, like me, in solitary confinement — except for a few minutes for bathing. We ate only rice that had been boiled with peas or the roots of water spinach. We had no reading materials; my parents could visit only once a month.

After a two-week interrogation period at the beginning of my detention — during which I was just deprived of sleep for a few days and slapped around a couple of times — life was actually quite cheerful.

This may sound improbable, or mad, but we were young and blindly confident that the dictatorship would collapse sooner or later. After day broke, I would pass the time chatting with my friends who had been arrested with me, talking loudly through the walls of our cells.

But then, in late April 1999, we were transferred to various prisons in central Myanmar. I was taken to Myingyan, the most infamous of the lot. I was again placed in a cell alone, but there no communication was allowed at all and any violation met with heavy punishment, like caning. The days passed with little or no human interaction but for rare, brief exchanges with the prison guards.

I would fantasize about reading, and I would listen to passing conversations in the hope of picking up something about the latest political news. At night, I would try to coax my dreams into letting me go home — only so that I could pick up some books and bring them back to prison with me.

I remember dropping a plastic spoon one day, and then wondering whether the feeble sound that followed came from its hitting the cement floor or my muttering something to myself. I could no longer remember the sound of my own voice.

My mental pain kept growing — until it dawned on me that I would go mad if I continued to want things I could not get. Although this was a moment of utter hopelessness, it ended my delusional urges. I lost my love of books then — and I have yet to win it back fully — but I gained something else.

I started experimenting with modes of meditation I’d vaguely heard about while growing up. I tried visualizing myself as a collection of bones, scanning every part of my skeleton. I tried metta, wishing myself well and radiating that peace toward others. I tried to observe my own breathing.

It worked. Over time, I stopped thinking about how many more years I had left to serve and started looking upon my loneliness in confinement as precious solitude.

Just one month before I was released from prison in 2005, we, the political prisoners at Myingyan prison, were shown a documentary called “Doing Time, Doing Vipassana,” about the first meditation courses given to detainees in India. I still don’t know why this was organized. But it was our first TV experience in years and the strict regimen of the exercises depicted in the film made an impression on me.

Just after I was released, I went to a meditation center in Yangon run by S. N. Goenka, a Myanmar-born Indian businessman. I took a 10-day course requiring students to meditate from 4 a.m. to 9 p.m. in an atmosphere very much like solitary confinement — and came out of it with more clarity and peace than I’d ever known.

Goenka now conducts similar courses inside Insein and other prisons in Myanmar; it’s one of those that I am joining today. I’ll be among the volunteers who, in order to free up the inmates for meditation, cook or take on whatever other chores they usually are asked to perform. At other times, I will have a chance to join them.

But I will not be allowed to read or write, or to communicate with either the outside world or others who are mediating.

A well-known saying among Burmese inmates has it that if on the day you are released you turn around to look at the gate, you will return to prison. On the day I was let out, I did turn around to take a last look at that red-brick wall. And I’m going back all right.