How Buddhism gets localized

Colombo, Sri Lanka -- The spread of Buddhism was due to two reasons. First was the royal patronage it received from Emperors Ashoka and Harsha later the Pala kings. The second was the popular support it received due to its essentially non intrusive nature of its dictates and practices. The countries that have the largest Buddhist populations are China, Japan, Thailand, Vietnam, Myanmar, Sri Lanka, South Korea, Taiwan, Cambodia, and India. 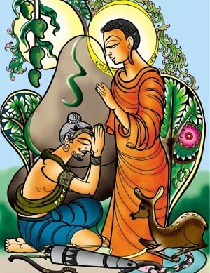 The spread of Buddhism far and wide also made its traditional teachings and philosophy subject to an assimilative process that made it indigenous to the host society and culture. The spread of Buddhism was always through missionaries and pilgrims who followed established trade routes. While it had to compete with established religions it was always amenable to the osmotic absorption of local beliefs and traditions. This paper examines how Buddhism is localized in Sri Lanka, Japan and India.

Buddhism arrived in Sri Lanka under royal patronage and became the state religion and a national identity. From its inception it became the sole religion of the state and the Buddhist monastic order was so fashioned that the Buddhist monk was royal advisor, educator and spiritual guide. To a great extent the same socio political order took root in Myanmar and Thailand. Sri Lanka is regarded as the cradle of pure Theravada Buddhism. While this school of Buddhism is soundly based on the Four Noble Truths which eventually leads to Nibbana and the end of suffering the localized Buddhism that is popularly practiced has more mundane objectives such as success in business, social mobility, political recognition etc. These worldly pursuits are far removed from the austere Buddhists teachings found in canonical texts.

The Buddhists of Sri Lanka practice a form of devotional and ritualistic Buddhism that has a marginal relation to the Buddhist doctrine of suffering and Nibbana.

In day to day practice of localized Buddhism the ordinary Buddhist life is a series of rituals, ceremonies and traditions which serve to produce a society that is homogenous in terms of religious observances and the acceptance of the authority of the Buddhist clergy.

The rituals performed by Buddhists of Sri Lanka are in essence intended to gain worldly rewards and to prevent misfortune. In order to reach these objectives the Buddha and the monks are invested with supernatural powers.

The purpose of these practices is to gain as much merit as possible and the act of giving ‘Dana’ is central to this form of Buddhist living.

Max Weber when describing Buddhism in Sri Lanka as ‘Monastic Landlordism’ comes close to the localized Buddhism of Sri Lanka where the Temples held large tracts of land not so much as exploitative feudal land lords but benevolent custodians of the belief system that held the nation together.

Buddhism reached the shores of Japan as the religion of the elite society. It was established in the Nara imperial court. Gradually it spread among the general population simultaneous to its synthesis with Shinto. The adoption of Buddhism as the official religion of the court was an accident that owes its occurrence to the ascendancy of the Soga family. During the Taikareforms , Buddhism became the instrument of power of the emperor paving way for the creation of a state sponsored and state administered Buddhism where the monks were recognized officials. Yet Buddhism remained confined to the aristocracy with ordinary people rarely involved in the practice of the religion. This court monopoly of Buddhism in Nara was the cause of the removal of the seat of government from Nara and the shift to Kyoto.

The shift of the imperial capital to Kyoto by Emperor Kammu at the close of the 8th century marked the beginning of the Heian period and the golden years of imperial patronage of Buddhism. The new emperor removed himself from the Nara temples and founded a long line of temples in the environs of Kyoto. The end of the Heian period marked the rise of the warrior class which in turn had a major impact on Buddhism and its role in Japans political order. Increasingly people turned to religion with Buddhist priests who were used to lavish lifestyles were ignored or marginalized with new sects coming to fill the void and meet the needs of the people.

In this backdrop of political upheaval and religious transformations three distinct sects of Buddhism, True Pure Land, Nichiren, and Zen, gained tremendous popularity. While the old established and powerful monasteries were busy pursuing their economic and political ambitions, the new orders spread their teaching that helped spread Buddhism throughout Japan.

For centuries thereafter, Buddhism was more a political instrument than a belief system. The systems of government under imperial rule or the Shoguns influenced the practice of Buddhism.

Buddhism morphed in to a definite Chinese mold that was compatible with the Chinese way of life or the Chinese world view. Thus Buddhism adopted ancestral worship and obscure texts brought from India on filial piety became core belief systems. Buddhism spread faster in northern China where social dynamics helped demolish cultural barriers between the elite ruling families and the general population; In contrast the southern aristocracy and royal families retained their monopoly on power. Daoist and Confucian political ideology helped sustain the political status of elite clans in the south. Finally Buddhism gained official support during the reign of Emperor Wu of the Liang Dynasty. However Buddhism spread fast among the peasantry both in the north and the south.

The immense popularity of Buddhism during the Tang Dynasty is evident from the many caves and structures that survive to date.

As the first religion to come in to China from outside Buddhism has had a major impact on Chinese culture, politics, literature and philosophy for nearly two millennia during which Buddhism was totally and irrevocably localized.

Buddhism is a belief system that evolved in a society that was already under the influence of Hindu Brahamin teaching. The Buddha in seeking the truth to his satisfaction was a social reformer who questioned many of the traditions, surmises and even the dogma that was contemporary to his time. Therefore it was inevitable that his teachings were founded on strong moral assumptions that determined whether a specific act under defined conditions was right [moral] ,wrong [immoral] or neutral [neither right or wrong and hence no moral implication].

Thus Buddhism when transplanted in any society had the advantage of immediately triggering a discussion or debate on ‘Morality? This usually happened according to the composition, structure and genius of that particular society, group or country. It is this unique character of Buddhism that makes it even today a `Science of Morality’. This allows Buddhism as practiced in any country to seek the ‘Moral Truth’ in the context within which it is engaged. The French anthropologist Claude Levi-Strauss of the Sorbonne in Paris wrote on Buddhism "Between this form of religion and myself, there was no likelihood of misunderstanding. It was not a question of bowing down in front of idols or of adoring a supposed supernatural order, but only of paying homage to the decisive wisdom that a thinker, or the society which created his legend, had evolved twenty-five centuries before and to which my civilization could contribute only by confirming it".

This examines Buddhism through an anthropological lens. Hence it does not follow the familiar path of the textual, historical and philosophical analysis. It is necessary to see Buddhism in these different landscapes of Sri Lanka, Japan and China though local practices and traditions instead of the pure textual scripture. It is of course easy to dismiss these traditions and rituals as aberrations or corruptions of the pristine text. However that would be a myopic construction of a far deeper reality of Buddhism as a living experience in the countries that are examined in this paper. Most western scholars associate the practiced Buddhism with notions of political influences such as power, tribe and ethnicity. The anthropology of Buddhism in almost every Asian country contains a wide array of local religious rituals which can only be explained as local compulsions through the millennia since the first sermon at the Deer park at Isipathana.