Chennai, India -- Malaysia Airlines offered to fly K.S. Narendran to Kuala Lumpur after Flight 370 vanished almost two weeks ago. His wife, Chandrika Sharma, was one of 239 people aboard the passenger jet. 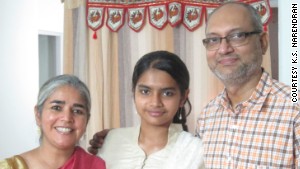 << Chandrika Sharma, left, was on Flight 370; her daughter Meghna and husband K.S. Narendran wait patiently, trying to manage their anxiety and longing for her return.

But Narendran declined. He didn't see any point to leaving India when there was no information. He preferred to stay at home in the south Indian city of Chennai, surrounded by family and friends.

Each one of us has a different way of coping with tragedy. Others who had relatives on Flight 370 have publicly expressed anger and frustration as the days have marched on with few clues about what happened to Flight 370. Two mothers wailed at a press briefing room in Kuala Lumpur; their grief echoed around the world on television sets and on the Internet.

Narendran, a human resources consultant, closed himself off to all that. He didn't watch the news or follow it on his computer. Quietly at home, he put in words some of what was in his heart. The result was a note for friends and family with whom he was unable to stay in touch personally through his ordeal.

I asked him if he'd share what he'd written with CNN. He agreed.

His wife left Chennai on the morning of March 7. The executive secretary of the International Collective in Support of Fishworkers was on her way to Mongolia for a United Nations conference. She was to return by the 15th.

Narendran is still waiting for her to come home. He is still waiting, as he says, "for the wheels of invisible diplomacy and intelligence work, and the military might of countries to come together in complementing ways to outwit and overcome sinister minds, if indeed that is what is at work."

In his note, he said:

If one were not directly and personally involved, one could have marveled at evil genius that authored a plot such as this, and the craft and research that supported it. Presently, it only brings to the fore how little we actually know, how vulnerable we are, and the things we take for granted about people, places, and things.

He knew people must be wondering how he deals with each day.

As individuals, we can do very little. We wait patiently. With every passing day and each fragment of information that comes in, we revise the narrative strung together, and articulate the new set of perplexing and urgent questions that inevitably come up. My friends and family mostly do this for me, leaving me to take stock at the day's end in what seems like a 45-minute feature of "Face the Facts."

He wrote that he did watch the press conferences on the missing plane. But those, he said, have been short in detail.

For now, I remain open to news that point to clear, incontrovertible evidence of what happened, and actions taken or afoot that can bring the whole incident to a satisfactory close. What is priority is information that is a step closer to bringing Chandrika back, and for us to plan our next steps to redesign our life from here on.

He said his daughter Meghna is evaluating how she might be able to return to college, how she might rebuild a daily routine and manage her anxiety and longing for her mother.

His wife's mother remains confident of her daughter's return. Narendran's mother is strong and steadfast in her faith. For his part, he said, he is not a believer of miracles.

Miracles, he said, is a way of making sense of what apparently does not make sense; of what is not understood or what seems improbable.

I remain focused on what we have at hand by way of information, and stay with the knowledge that Chandrika is strong and courageous, that her goodness must count for something, somewhere. I carry firmly the faith that the forces of life are eternal, immutable and ever present to keep the drama ever moving. In the ultimate analysis, I am neither favored nor deserted. No one is.

He said he has drawn strength from his recent experience with Vipassana, an ancient technique of meditation in India.

Vipassana means to see things as they really are.

The essential message of transience and impermanence has lent perspective, he said. The practice of being in the "present," however difficult, he said, has helped him manage "the menace of an overworked imagination."

As family, we are not given to histrionics/theatrics. We suffer, we agonize, we tether on the edge, but seldom allow ourselves to be overwhelmed. I don't say this with any sense of self-congratulation or offer it as recommendation. I am merely saying this for those who know us from a distance or fleetingly.

Narendran ended his note by saying he felt comforted, energized and renewed by the messages of fondness, solidarity, prayer and hope that he has received from well-wishers around the world.

I told him the families and loved ones of the other passengers would find the same in his words.

Many of us know uncertainty can be a wretched foe. Not knowing the littlest things keep us on edge during the day and awake at night. I admired Narendran for his quiet strength in his hour of turmoil. I hoped for him the very best outcome, though with each day, that hope was surely fading.

Editor's Note: At press time, the Prime Minister of Malaysia Najib Razak announced on Monday that a new analysis of electronic data shows that the flight of Malaysian airlines with 239 people aboard "ended" in a remote area of the Indian ocean and indicated there were no survivors.