Jakarta, Indonesia -- Muslims and Buddhists in Indonesia have joined hands to help resolve the conflict over the Rohingya Muslim minority in Myanmar and plan to send a team to Rakhine State to talk with Buddhist monks, according to the Jakarta Post. 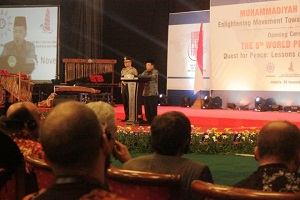 << The World Peace Forum has been held every two years since 2006. This year's event, the 5th World Peace Forum was held in Jakarta with the theme, "Quest for Peace: Lessons of Conflict Resolution." Photo: muhammadiyah.or.id

Reporting November 23 on the 5th World Peace Forum held in Jakarta November 20-23, the newspaper says Indonesia’s largest Muslim organization, Nahdlatul Ulama, in collaboration with the Indonesian Ulema Council and the Council of Buddhist Communities or Walubi, would make a trip to Myanmar in December to start a dialogue with Myanmar Buddhist monks.

Nahdlatul Ulama executive council chairman Slamet Effendy Yusuf told media: “I agree with the United Nations which said that the conflict in Myanmar could be resolved by allowing the Muslim community and Buddhist community to meet and talk. This is not only a problem for Myanmar, but also our concern.”

Suhadi Sendjaja from Walubi told the newspaper that through the visit, he hoped that people in Myanmar could learn from Indonesia.

“Here, the number of Muslims is so many while the Buddhists are only a few, but we are safe. In Myanmar, it is the other way around,” he said, adding that the Indonesian delegation would not force a reconciliation in Myanmar.

“We will not direct them toward a reconciliation. We will only explain our situation in Indonesia,” said the Buddhist community representative at the forum aimed to reduce conflicts around the world.

Myanmar’s estimated 1.3 million Rohingya have been denied citizenship with the authorities officially categorizing them as Bengali, claiming they are illegal immigrants. Attacks by Buddhist mobs in 2012 left hundreds dead and 140,000 detained in camps. Many have been trying to flee the country, according to the newspaper.