Beijing, China -- Buddhism is on the rise in China, currently estimated to have about 200-300 million adherents, for a variety of reasons. 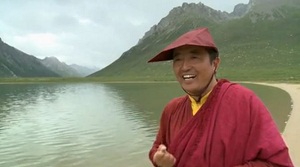 After the extreme persecution of the Cultural Revolution in the 1960s and 70s, the nation slowly and quietly allowed some cracks to form in its atheist and socialist facade.

Even high officials in the Communist Party have recognized the beneficial moral teachings of Buddhism in a time of increasing wealth, consumerism, and spoiled single-children.

In a surprise announcement during the president’s visit to Beijing a few weeks ago, the U.S. and China reached a major climate deal.

Remarkably, the atheist country, which is also the world’s number one polluter, has recently embraced Buddhism to help persuade its citizens to care about the environment.

Liu Jianqiang, lifelong atheist and investigative environmental journalist, is becoming a Buddhist. His first expose was on illegal dam construction on the upper Yangtze River.

Over the last 10 years, his work have led to national attention, a job firing and now burnout.

Liu is one of millions of Chinese returning to Buddhist, Taoist and Confucian temples that have at times in the past been condemned by the government.

A little more than four decades ago, during China’s Cultural Revolution, many Buddhist temples were destroyed or defaced. Today, these temples are alive with worshipers. By some accounts, one out of every five Chinese call themselves Buddhists.

Some scholars say this search for faith is linked to China’s massive environmental problems.

China's world is one which capitalism and socialism and consumerism have created an industrial behemoth that is just thundering ahead, that is draining life out of the villages. It is one which has polluted the soil, water and the air, and has made China heartless and souless.

Back in China’s capital, Liu Jianqiang, guided by the Tibetan monk Qiamei Rinpoche, says his spiritual journey has changed the way he sees the world and his whole approach to writing.

Says Liu, "Before, I only wrote from a legal point of view. It’s wrong, this is a national park, and how can you destroy it? Now when I write, in my mind what I thought is that they are fishes, they are millions of lives. I can clearly see my change."

China’s omnipresent and officially atheist Communist Party appears to be actively supporting traditional culture as a way to lead people back toward a more environmentally friendly lifestyle.

Party official Dai Binnguo addressed this in a recent gathering. He said that traditional Chinese culture promotes harmony between man and nature and encourages limited consumption and a simple way of life.
"We support this. We don’t oppose taking from nature. We do oppose overexploitation. We want gold mountain, but we also want clear water and green mountain."

"Traditional Chinese culture promotes harmony between man and nature in a simple way of life. We support this. We don’t oppose taking from nature. We oppose overexploitation. We want gold mountain but we also want clear water and green mountain," he adds.

In the highlands of western China, an area adjoining the autonomous region more commonly known outside China as Tibet, it’s rich in biodiversity is said to be greatly imperiled.

This is also home to the headwaters of the Yellow and Yangtze Rivers, quite literally a lifeline to hundreds of millions of people downstream.

A prominent local monk Tashi Sange explains how conservation and respect for all living things has long been an intrinsic part of life here.

"Mama and papa told me in secret that this is a sacred lake. But they said, don’t ever talk about it openly, because we couldn’t talk about gods. They do not exist in the Communist Party’s eyes; they are superstitions. If anyone talked about a god they would be beaten, so we wouldn’t dare to say it," says Tashi.

But through thick and thin in a country that’s seen so much political upheaval and social change, those fundamental values have endured, he says.

"No matter if you are a newborn or an 80-year-old," Tashi adds, "you are all protectors. You are all responsible. And you have the responsibility. All life should be protected."

There is a sense that this Buddhist awakening is forging a partnership between religion and government around environment that is only going to get stronger and stronger.

It is a partnership that Liu Jianqiang hopes will help lower the heavy environmental price China is paying for its economic progress of recent decades.