PETALING JAYA, Selagor -- Its origins began about 2,500 years ago, yet the core teachings of Siddhartha Gautama Buddha live on. 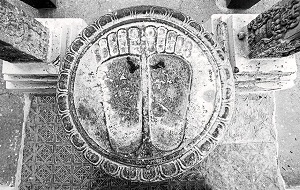 << Devotion in motion: symbols such as this ‘Buddhapada’ from the Gupta period (320-550 AD) are used as objects of veneration by devotees.

However, certain practices have changed somewhat and Vijaya Samarawickrama, who is a patron of the Sasana Abhiwudhi Wardhana Society, said he had spent years trying to break the misconception behind the act of “praying”.

“The Buddha is not God. He was a man who attained enlightenment,” he said.

Fondly known as Uncle Vijaya, the 70-year-old pointed out that there were no Buddha statues in the first 300 years of Buddhism.

“Early Buddhists were very spiritual. They were attracted by a teaching which they believed would lead to the end of suffering,” he said.

Evidence of Buddhist art from that time depicted symbols such as a wheel, an empty throne, a bodhi tree, footprints or a riderless horse.

“Buddhists then were reluctant to make a statue of the great teacher.”

When Buddha gained enlightenment, he transcended all forms of physical existence and as such, was impossible to be represented physically, Uncle Vijaya said.

“The impetus for making a statue of the Buddha was started by a Hellenistic movement,” he added.

Uncle Vijaya believed elements of the worship were brought over from Greece with a need to represent the Buddha in human form.

Archaeological findings pinpoint the earliest anthropomorphic representations of Buddha with distinct European facial features to the Gandhara Valley, dating back to 200 BC.

The tradition has since been carried down to become part of Buddhism today, which led to many devotees asking: Has Buddhism become a religion of idol worship?

Uncle Vijaya said blindly bowing down to a “block of stone” was wrong.

“We must understand the representation behind the Buddha’s image,” he said, stressing that disciples of the Buddha were not “idol worshipers” and likening Buddha statues to the country’s flag.

“It could be regarded as just another piece of cloth. But when the flag is raised, I know I must stand still to show respect to my country,” he said.

“Similarly, when a devotee pays respect to the image of the Buddha, he is revering the teachings laid down by the great teacher.”

Followers may remember the great teacher by paying reverence to objects in three categories which are saririka (his bodily remains), paribhojika (possessions left behind by the Buddha and places he visited) or udesika (indicative reminders such as the dhamma wheel or an image of the Buddha).

“However, the Buddha did not teach us to pray to him,” he said, adding that Buddhists had aspirations to achieve goals.

Objects and places suited for veneration, according to him, served to evoke calmness and to enhance the faith of Buddhists.

Dr Tan, who has led many Buddhist pilgrimage trips to India, said the “connection” experienced by devotees during their visits were totally different.

He said the “essence“ of Buddha’s teachings was good enough for spiritually-attuned devotees.