Colombo, Sri Lanka -- In the afterglow of Binara Poya, we need to reflect on the Buddha Dhamma’s main theme “May all beings be happy” and on some practical issues connected to it.   At a time when United States policies, especially on human rights issues, are being widely discussed in Sri Lanka, we wish to focus today on the San Diego based ‘Dharma Voices for Animals’ (DVA). 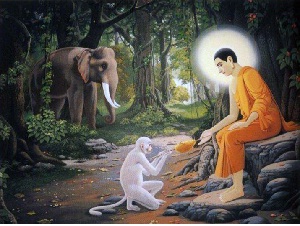 DVA is a movement of those committed, both to practising the teachings of the Buddha (The Dharma) and to speaking out when animal suffering is supported by the actions of those in Dharma communities and by the policies of Dharma centres.

According to the DVA, it wants to be the voice of the animals, who cannot speak our languages and are unable to ask, “Why are you paying people to do this to me” or “Why are you supporting my suffering?”

DVA says it wants to support those who are willing to speak out about the harm we cause other sentient beings, when we eat them, use their body parts as clothing and in other ways, or use household and personal hygiene products that are tested on animals.

While DVA recognises the challenges of living in a complex, modern society, it says it wishes to promote the choices that provide the greatest reduction of animal suffering. Visiting Sri Lanka in October this year to propagate the vision and goals of the Dharma Voices of Animals will be its Co-Founder and President Bob Isaacson.

According to the DVA, Mr. Isaacson has practised the Dharma in the Vipassana of Theravada tradition for about twenty years. He was a civil rights and human rights lawyer for twenty-five years, specialising in defending people against the death penalty. Bob Isaacson now teaches the Dharma, leads two Sanghas, and leads day-long and weekend retreats in the San Diego area, having been trained in Spirit Rock Meditation Centre’s Community Dharma Leader Programme.

Most people in Sri Lanka are familiar with vegetarianism, but not with the higher dimension of veganism. People choose to be vegan for health, environmental, and ethical reasons.  For example, some vegans believe that we promote the meat industry by consuming eggs and dairy products. That is, once dairy cows or egg-laying chickens are too old to be productive, they are often sold as meat. Since male calves do not produce milk, they usually are raised for veal or other products. Some people avoid these items because of conditions associated with their production.

"While DVA recognises the challenges of living in a complex, modern society, it says it wishes to promote the choices that provide the greatest reduction of animal suffering" Many vegans choose this lifestyle to promote a more humane and caring world. They know they are not perfect, but believe they have a responsibility to try to do their best, while not being judgmental of others.In Sri Lanka for the past few decades we have had a proactive Association for Non Violence.  It has now formed a youth movement also to educate and encourage young people to move in to the healthy and merciful traditions of vegetarianism. We hope in the coming months and years they would also be able to rise to the dimensions of veganism and be the Dharma Voices for Animals.

The Agriculture and Environment Statistics Division of the Department of Census and Statistics in its latest report for last year gives some shocking figures. The number of cattle legally slaughtered was 151,024; lambs and goats 55,985; and pigs 23,764. What a shame!

The unofficial figures must be much higher, while figures on the killing of chickens, ducks and other birds are not available because they can be slaughtered without permits by companies on a large scale and households on a smaller scale.

In this new era of unity in diversity and respect for all, we hope that Sri Lankans will sincerely observe the fundamental precepts of making all beings happy and also become the Dharma Voices for Animals so that our country would be more blessed, merciful and eco-friendly.