San Francisco, CA (USA) -- In the Buddhist practice awakening, or sambodhi (in pali), is the achievement of inner peace that sustains itself regardless of conditions beyond our control. In verse 154 of the great dhammapada, when the Buddha announces his awakening, he refers to lasting happiness as 'the unconditioned.' 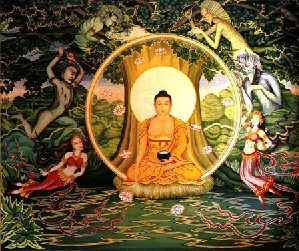 Transcendence is a a state of witnessing as experiences unfold in a state of constant flux and upheaval without taking the universal events of life personally; we are all subject to the ravages of aging and sickness, the grief of separation from loved ones, financial instability, frustrations, loss.

Additionally, our peace of mind is sabotaged by our default settings: remaining constantly vigilant for threats even while we are perfectly safe, dwelling obsessively on negative experiences while overlooking the positive,, our predilection for addictive, short-term sensual pleasures (consumerism, escapist entertainment, meaningless hook ups and on). Alas, no matter how much we accumulate, we feel that underlying awareness that the sugary sweetness of sensory pleasures will end and we'll once again realize how exposed we are to inevitable losses and separation.

While the lures of money, objects, sex and privilege lose their luster, liberation through spiritual practice provides a complete form of happiness; awakening means becoming aware of a calmness and ease that doesn't require chasing fleeting sensual pleasures, all of which are too quickly found wanting. The lasting contentments of awakening can be maintained, as they are produced by that resources entirely within our control: the skill of focusing the mind, relinquishing unskillful thoughts and sustaining the proper attitudes of kindness, appreciation, equanimity, focus. In short, spiritual practice aims for a liberation from imprisonment, a freedom from seeking happiness in all the wrong places, a true peace in the sustainable and endlessly renewable.


The etymology of the word nibbana (pali) is derived from the verb to extinguish or snuff out, for example using our breath to blow out a candle. Just as extinguishing a fire results in a cooling down, siitibhuuta in pali, the tranquil state achieved after quenching the devouring heat of greed, hatred, and self-righteousness, results in a 'cool head.' In using common words--such as nibbana and siitibhhutta-- the Buddha was purposely expressing to his followers that the liberating goal of spiritual practice is attainable, a real possibility not reserved solely for people in robes sitting in solitude in jungles or remote mountains. Hatred, greed, self-centered obsession are uncomfortable states in which to reside, we can be relieved of these conditions.

When we drop the idea of liberation being a place or lasting state, we can open to the possibility of incremental liberation. Rather than being trapped in comparing our states of ease to "complete liberation from all suffering" we can rest in states of ease as they arise, enjoying release without judging or criticizing it in absolute terms. In other words, liberation is available; it's an active state, a verb that requires a degree of effort, not a noun suggesting a place one arrives at; being freed from needless suffering requires continuous mental awareness; it requires discipline and practice to cultivate and maintain a state of contentment throughout the inevitable pains and frustrations of life. What follows is a list of some early Buddhist paths that lead to real and reliable serenity.

Awakening through Concentration
The oldest paths to liberation, such as those described in the Anapanasati sutta, arrive via the meditative practices of concentration (samadhi in pali). The ease born of focusing awareness on a single meditative object--perhaps the breath, the phrases of metta, body awareness, consciousness itself--allows a state of relaxed ease to suffuse the body; we're no longer armored, muscles in a habitual state of contraction. The ease derives from releasing our attention from that which we have no real control. In letting go of attending to all that is arising and passing in the background, we're freed to attend to that which we can influence: for example, we work with the breath, extending the exhalations to calm the mind, exploring the sensations of respiration to center awareness. From a present-time perspective of a relaxed body and mind, the thoughts that disturb us--invariably based on past memories or future projections--lose their appeal. Instead the mind floats in awareness of a sensations, eventually dropping into the profound absorption states (jhanas).

Awakening via Atammayata
Another practice that leads to liberation can described as 'resting in a mind like a vast sky,' a practice that stands in some ways as an opposite to concentration. Instead of following any specific thoughts, moods, perceptions or sensations flowing through awareness, we keep the mind open and spacious, floating in the fullness of the present moment that is singular and never repeating. This results in a state known as atammayata (pali): in contrast to the mind's tendency to contract around possible threats or opportunities, resulting in a rollercoaster ride of perceptions that leave us rattled, shaken and stirred, we keep the mind aware of our complete present experience allows us to remain unattached, releasing our fixation on worries that can quickly darken the mind. A spacious awareness always has a wide enough array of sensations to balance out the disturbances; a narrow mind becomes poisoned by fleeting fears and insecurities.

Awakening Through Insight
There are many that seek a path to liberation via insight (vipassana in pali) practice of noting the impermanence and impersonality of conditioned experience. This practice found its greatest expression in the path elucidated by the Venerable Mahasi Sayadaw. The process involves freeing awareness from adherence to the constant narratives and ideas that run through the mind, paying attention instead to the actual experiences themselves, which are comprised of a series of sensations. In bare attention--awareness free of ideas or concepts--we experience only a flow of body sensations, feeling states, ephemeral moods and on. As we attend to this ceaseless parade, we arrive at a profound state wherein we become keenly aware of existing in a state that's constantly in flux, situations breaking apart, known as the dissolution awareness (bhanganupassana-nana pali). Even the sensations and perceptions we associate with our core identity or self are observed to be impermanent and unreliable.

Many practitioners will find this experience to be pleasant, while some will experience dissolution awareness as profoundly unsettling, a kind of dark night of the soul so to speak. For direct knowledge of the constant dissolution of life's moments leaves us without any familiar sense of stability; this is a path that commonly leads through states of terror, disgust, and eventually a desperate yearning for deliverance. Only when a profound equanimity towards all phenomena is arrived at, a perception of identity-less awareness. This path requires seeing non-self in all experience, abandoning the clinging to the mind and body processes is the requirement for any relief. Not a path for the faint hearted or the easily deterred.

Finally, Don't claim enlightenment
It is worth noting that the Buddha did not announce himself to be enlightened; but rather he said "I am awake." (Buddha is a title that means 'he who has awakened.) The Buddha spent his time answering questions, not proselytizing the disenclined or practitioners of other faiths. When asked what to believe he encouraged practitioners to investigate the mind for themselves, seeing which kind of mental and physical activities lead to peace and which to suffering. Whatever degree of liberation we seek or attain, seeking a soap box and bullhorn to persuade others is the surest sign we're nowhere near any liberation, and that's truly a shame if ever there was one.