He paralled the flourishing, longevity, and strengthening of the Buddha Sasana to the Buddha's own dedication and personal suffering for the sake of the enlightenment of all.

The following is Rinpoche's message in full. 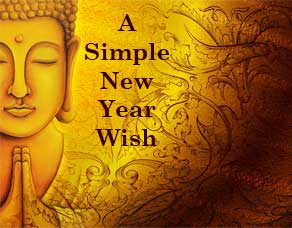 In this coming new year I would like to request all of you to spend five seconds really wanting the Buddhadharma to flourish and remain in this samsara. Just simply wanting or wishing this will do. I am not even asking you to light a lamp, burn incense, fold your palms, chant a mantra, or sit and meditate. Just a sincere and clear wish, however short, from a lot of us truly wanting the Buddhadharma to flourish and remain, will be the key to its flourishing, longevity, and strengthening.

This is because the real hardship was borne and accomplished by the Buddha himself who endured so much difficulty in his bodhisattva days. So often the bodhisattva forsook his own happiness to dedicate the power of his actions to the flourishing of his own dharma in the future.

For the ailing, the bodhisattva forsook his own sustenance. For one word of bodhicitta, the bodhisattva gave his own child, spouse and wealth. To hear one single word of truth, the bodhisattva undertook penance and paid homage, venerated and made offerings to truth tellers, renunciants, and arhats.

For ocean-like aeons, for the sake of the enlightenment of all, the bodhisattva dedicated his life to searching for the truth. To that end he never stopped hearing, learning, disciplining himself, and making offerings to the buddhas of the ten directions.

Out of his compassion the bodhisattva gave his most cherished flesh, bone, and blood, his limbs and body parts. By the power of all his merit, the bodhisattva aspired that the dharma will flourish and remain.

The bodhisattva went through such hardships to lead all beings through the three vehicles and to give them the dharma through his perfect generosity. He engaged in every possible action to rescue beings from the fires of emotion and to help them win victory over non-virtue and enjoy the wealth of virtue. And the bodhisattva put his utmost effort into rescuing beings from the dungeon of wrong views and to lead them in the right direction to the right view. There was never an ounce of doubt that the dharma will not flourish.