A night as a Buddhist monk in Koyasan

Richard Pennick stays in an historic centre of Shingon Buddhism

Koyasan, Japan -- It is a place of tranquil beauty. Moss-covered tombs and headstones lean at odd angles, tilted by intruding roots. A forest of giant cedars has grown up over the centuries around the stone memorials. I am walking through the ancient Okunoin Cemetery. 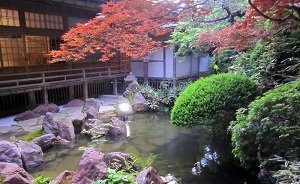 << A night as a Buddhist monk in Koyasan
Shojoshin-in Temple Inn is a serene place to stay. Picture: Richard Pennick

Earlier today, I left Kyoto by train and three hours later arrived at the foot of Mt Koya. I rode the funicular up the steep forested mountainside to this small, peaceful mountain-top town of Koyasan, the world headquarters of the Shingon School of Esoteric Buddhism and the home of this Okunoin Cemetery.

I enter across the ceremonial Ichinohashi Bridge, protocol requiring a bow in respect to the memory of Kobo Daishi who founded the Shingon School of Esoteric Buddhism in Koyasan in AD816.

From AD835, the year of Kobo Daishi’s death, the remains of feudal lords, warriors, notable monks and recent captains of industry are laid to rest here. More than 200,000 tombs, headstones and memorial Buddhas, many draped in red cloth, spread out from the path into the forest of 400-year-old cedars.

It is a fascinating walk.

The 2km path ends at Torodo Hall (Hall of Lamps) in front of the Kobe Daishi mausoleum, where 10,000 donated lanterns are kept lit inside its splendid hall. Emperor Daigo bestowed the title Kobo Daishi, Great Master of the Propagated Teaching, on the death of the revered monk.

After taking tea and sweet biscuits in the mausoleum “Offering House”, I loop back through the cemetery to the Ichinohashi Bridge.

Heading back into town, I enjoy a nourishing Shojin-ryori lunch (Buddhist vegetarian), of buckwheat noodle soup with mushrooms, rice and a plate of hot tempura vegetables at a small restaurant.

At Shojoshin-in Temple, for one day and night, I experience the life in a Buddhist monastery (with wi-fi). When I remove my shoes, I enter another world. For the ancient temple is a serene place of screened corridors, covered walkways, and ornamental rock gardens with pools of colourful carp.

Much of the complex remains a mystery. Behind screened walls are the monks’ living quarters, a Buddhist studies school and a spiritual healing centre. The temple’s shrine is open to all at the back of the complex.

My bedroom looks out beyond lattice-screened windows through low pines to the flower garden. A small low table on tatami matting is the only furniture. A big kettle, a tray of little cups, a teapot for making tea and a small basket of biscuits fill a low shelf. The super-clean toilets and male and female onsen baths are down the hall.

That evening, I sit on colourful embroidered cushions in the screened dining room as the young monks serve an excellent vegetarian meal. Futons (sleeping mattresses) are laid out and surprisingly comfortable.

Numerous Koyasan temples (shukubo) offer accommodation and meals to both pilgrims and visitors.

In the still of the morning, before breakfast, a muffled gong summons me to Buddhist prayers. The heady aroma of incense drifts through the shrine and three richly robed monks kneel before Buddha chanting the mantras, while turning the pages of their prayer books.

A touching moment ends the ceremony when an elderly lady, whose husband has recently died, kneels with one of the monks in front of the temple’s Buddha to pray for the safe transit of her husband’s spirit to the afterlife.

A welcome bowl of steaming hot miso soup and a bowl of rice with spinach and sesame seeds are served for breakfast.

Then after packing my bag, I leave the temple by minibus for a tour of the Buddhist Koyasan Garan Temple complex, where more than 100 majestic temples adorn forest clearings.

I walk to the rambling Kongobuji Temple and stone garden, to the biggest temple, Kondo Hall, and the towering 45m Konpon Daito Pagoda, home to the most important Buddha of Shingon Buddhism.

Koyasan has been an enlightenment.