Nevada, USA -- On September 25, 2016, Tue Quang Wisdom Light Foundation of Nevada, USA announced the completion of the Vietnamese translation of the entire collection of Sastras (Commentaries) in the Taisho Tripitaka (from volume 25 to volume 32) at the Lieu Quán Buddhist Cultural Center in Hue, Vietnam. 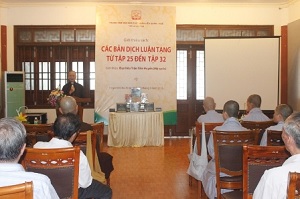 The translation of the Taisho Tripitaka into Vietnamese has been sponsored by family members of Dr. Tren tien Huyen who live in the United States. Over the last 10 years, the translators of Tue Quang Foundation, including Dr. Nguyên Heng Lý Kim Hoa and Dr. Nguyên Hue - Ðào Nguyên,  have completed several sutras, commentaries, dictionaries including the Commentaries on the Abhidharma Maha-Vibhasa, Mahayana Bodhisattva Study, The Bodhisattva’s Ten Stages , The Truth Sastra.

On this occasion, Dr. Tren tien Huyen introduced the entire Collection of 188 Commentaries to fellow Buddhists in Vietnam and overseas and as a token of appreciation to the Venerables, Bhiksus, Bhiksunis and the expert translators who have contributed extensively to the development of a Vietnamese Tripitaka. We are also planning to print the entire collection of Commentaries (over 37000 pages). Following its publication, we will donate it free of charge to Buddhist universities and temples both in Vietnam and overseas.