This is how Buddhist monks live without money

Laypeople and the monastic community have a relationship of mutual dependence. It's called 'gift economics'

"Take money, for example. In the past there wasn’t any paper money. Paper was just paper, without any value. Then people decided that silver money was hard to store, so they turned paper into money. And so it serves as money." 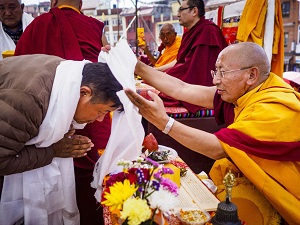 -- Ajahn Chah, monk, founder of two major monasteries in the Thai Forest Tradition, & instrumental  figure in the establishment of Theravada Buddhism in the West

Why do Buddhist monks reject the idea of money?

Practicing Buddhists make five promises – not to lie, not to steal, not to engage in sexual misconduct, not to harm any living creature and not to take intoxicating substances which lead to carelessness. These are called the ‘5 precepts’.

When Buddhist monks and nuns ordain – don the robes, shave their heads, and start their training – they make all of the same promises that lay Buddhists (practicing Buddhists who aren’t monks) do, but also promise to let go of their attachments to all social conventions. It’s what the Buddha did on his path to enlightenment, so the Vinaya – the rules he put together for monks to follow – say they should do the same.

To Buddhists (and a lot of economists), money counts as a social convention. Coins are only valuable because we’ve decided that they are, and the same goes for paper banknotes. So like other social conventions, Buddhist monks give it up. They can’t buy or sell anything, get cash out of the bank or even give or accept charitable donations.

Without money, how do monks get by?

Buddhist monks and nuns are completely reliant on the lay community to provide them with the material things they need to survive. In warmer Buddhist countries, monks will walk around their local village at mealtimes in what’s called an ‘alms round’, holding a bowl for locals to put food into. In the West, food often gets donated to monasteries in bulk, and volunteers then use it to prepare meals for the monks.

The lay community provides the money and the labor to build shelter for monks, make them clothes and buy them the technology they need to keep up with the world outside the monastery, from computers to iPads. Some monastic communities like the Forest Sangha even have a Twitter account.

Once a year, during the autumn festival of Kathina, families offer monks and nuns all the cloth they need for robes to get them through the winter months. Lay Buddhists club together to provide them with the basics in what’s known as an annual celebration of giving.

What do lay Buddhists get in return?

The lay community provides the monastic community with material support in exchange for the spiritual support they receive from them, in the form of ceremonies, guided meditation, or ad-hoc advice. It’s not a tit-for-tat kind of exchange – you don’t get a passage from the scriptures every time you donate a tin of tomatoes – but more of a relationship of mutual interdependence, or ‘gift economics’.

A gift economy is one where goods and services aren’t traded or sold but offered in good faith that at some point someone will give you something else.

Things don’t always go smoothly. Like anything, people interpret the rules in different ways, and some bend them a little too far. Monks are obliged to graciously accept anything that’s offered to them, whatever it may be. It’s not uncommon to see monasteries in Thailand overrun with dogs, donated by people who can’t look after them and know the monks can’t turn them away.

And the monks have been known to bend the rules as well. One small sect of Western Buddhists admitted to receiving rental income from people in receipt of housing benefit. Given the British taxpayer, who would be funding those benefits, definitely isn’t spiritually dependent on them, it goes against the ‘gift economics’ principle of the monk-to-layperson relationship.

Technically, as long as it’s the lay community and not the monks who collect the funds, then they’re not breaking any Buddhist rules by passing that cash on to the monks if they want to. A number of Buddhist groups use this justification to get other things like meditation classes, books and so on.

But a lot of Buddhists might take issue with this - whilst the monks aren’t actually handling any money, they are securing their material well-being by profiting from the lay community’s need for shelter and spiritual guidance. We end up with a situation where the Buddha’s teachings become a commodity, being sold to those who can afford it rather than offered to those who need it. That’s not gift economics anymore – it’s just standard market exchange.

Why stick to 'gift economics' if it's a flawed way of doing things?

People who break the rules will always exist – but for hundreds of Buddhist communities around the world, the system of mutual dependence is a really important part of Buddhist spirituality. Buddhists often refer to themselves as ‘practicing’ because living morally is a question of practice – something you get better at with time. No economic model is perfect, but this system at least allows both the monastic and the lay community to meet their spiritual and material needs.

---------
The author of this article is a lay supporter the Forest Sangha school, within the Theravada tradition. This is a personal interpretation of the Buddha's teachings and does not claim represent the views of all Buddhists.
TOP