A Call to All Buddhists

A respectful call to our Buddhist friends, teachers, and guides who remain emotionally and physically attached to such a global catastrophe.

New Mexico, USA -- Within our industrial civilization, the pace of life is overwhelmingly fast. Many (probably most, if we’re honest) are addicted to constant outside stimulus. One fleeting moment arises as we unsuccessfully cling to the last. Reaching for the next distraction, and the next, and the next, we look for stability, searching for permanence. The ephemeral, ironically, becomes an attachment to “things”. 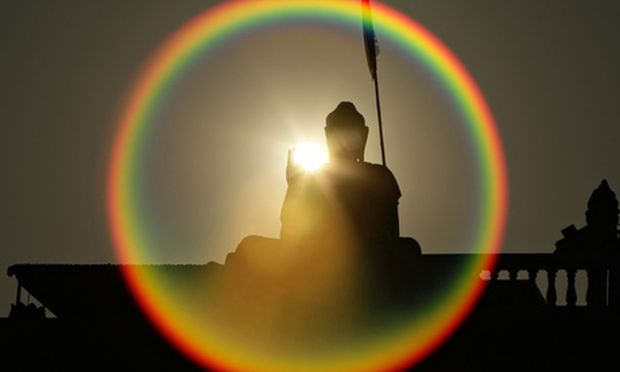 We’re attached to devices, convenience, and food, to experiences, and cravings, and expectations of immediate gratification. We swap real connection for the amenities of modern empire. The tragic casualty of maintaining our frazzled, wired, plugged-in state is nothing less than life itself; the ravenous devouring of the vital habitats which keep all species alive.

Craving and clinging to impermanent states or things is one thing. Simultaneously living within the industrial model, while attempting to alleviate the suffering it causes, is quite another. Therefore, I respectfully appeal to our Buddhist friends, teachers and guides to consider abandoning, dismantling or at the very least, moving towards the exit of our current civilized living arrangement. To remain emotionally and physically attached to such a global catastrophe is to continue to contribute to one of the roots of our modern suffering and frankly, an irresponsible way to live when considering the consequences it imposes on all sentient beings.

To be clear; leaving the industrial model entirely is no longer possible. Its impact and influence permeate the whole of Earth. Even in the heart of the Amazon, those who remain uncontacted by civilization have been identified, tagged and labeled for future assimilation into the dominant “civilized” culture. It’s only a matter of time before we devour and absorb them. It’s an absorption that’s been active for approximately 12,000 years; fueled now by the unassailable decree that the survival of industrial civilization depends on infinite growth on a finite resource planet. Adding to this obvious dilemma, humans are now in a state of population overshoot and no longer have the skill set (nor the same planetary conditions to go back to) to successfully live as our ancestors once did, we can begin to see the size and scope of the dire straits we face on a global scale.

Buddhists find themselves in a unique position when it comes to the eventual extinction of our species. Acceptance of that which is, will prepare those who have awakened to the reality of our situation. However, if one has never considered such a circumstance then awakening must completely unfold to prepare for the compassionate work ahead.

This continued awakening can unfold by taking action. Before one can most effectively participate in collective action, it’s vital that personal realization begins to foster within. This realization only further  solidifies through personal action. Remaining trapped within a living arrangement that requires suffering and injustice (just to maintain its course) is simply denying the predicament we find ourselves in. Liberation awaits with initial steps towards the exit of such a monkey trap. Only personal liberation can give one the insight to participate or organize sufficiently in collective action.

The Buddhist community has the skill set to mobilize masses and to turn individual action into a global movement. It is possible to live incredibly simply; letting go of the detrimental nature of convenience, consumption and comfort. Those things that keep us in the system are the attachments that are so destructive.

The thought of leaving the industrial machine usually brings about fear as for most of us, it’s all we’ve ever known, it provides for our very existence and without it we may die. What we fail to see is that remaining in it is cutting our own throats. Sure, civilization keeps us alive but it does so while it devours the habitat that keeps everything alive. It’s a vicious cycle.

So we continue to go to work,  producing and consuming, because that’s what we believe living is. We’ve confused making a living with living. Our dysfunctional loyalty to our identity as civilized humans is a painful road that destroys life instead of fully participating in it.

Six years ago my wife and I began to leave behind the trappings of modern living. We left our teaching careers, our health insurance, our credit score, and a very large portion of our possessions behind. Today we live in an intentional community in a Mongolian ger (yurt) where we chop wood and carry water. We are more present and we are experiencing liberation that is tough to explain to those who remain on the hamster wheel.

Moving towards the exit of civilization will not solve our predicament. There is no solution. What it will do is provide a lens that looks beyond the domestication and subsequent indoctrination of our conditioned lives. It begins to crack the story we tell ourselves about ourselves. A story that is covered by a thin layer that remains hidden from even those who are enlightened. This is apparent since there is little dialogue among the worldwide Buddhist community directly concerning industrial civilization and its role in suffering among all sentient beings. Instead the focus is upon something beyond civilization which ignores an important reality of the situation we find ourselves in.

Perhaps this is because Buddhism came into existence within the era of civilization? Is Buddhism a response to civilized living? If so, it has done little to slow it down. What it has done is allow people to better navigate such madness. Maybe that’s all we can ask for from something created by or within the realm of madness? Or can we ask for more?

If we are to truly see reality for what it is then we must see civilization for the absolute terror it has brought upon the living. We have been experiencing ecocide and genocide for centuries. Now we’re at the point of no return. Hoping for someone or some technological fix is not reality based. Accepting our reality and then acting accordingly is our only ethical choice. Trying to awaken up to one’s true nature is commendable; unless one is perpetuating a lifestyle that is destroying in the meantime. The good news is that the liberation and contentment one will feel by such action is beyond description. In fact, it’s enlightening.

Mike Sliwa is a husband and homesteader. He taught high school for 12 years and left his career for a simpler existence. Currently he and his wife are living off grid, perfecting their durable living skills in rural New Mexico. Mike speaks about a wide variety issues concerning simple living, white privilege, abrupt climate change, Near Term Human Extinction, and other consequences of the civilized industrial global economy. He is a co-founder of the social justice speaking agency truality.org. Mike is the author of Chasing a Different Carrot, A Manifesto for the Predicament of Privilege. You can find more information at michaelsliwa.wordpress.com.
TOP