Kathmandu, Nepal -- Clad in black sweatpants, red jackets and white helmets, the hundreds of cyclists pedaling the treacherously steep, narrow mountain passes to India from Nepal could be mistaken for a Himalayan version of the Tour de France. 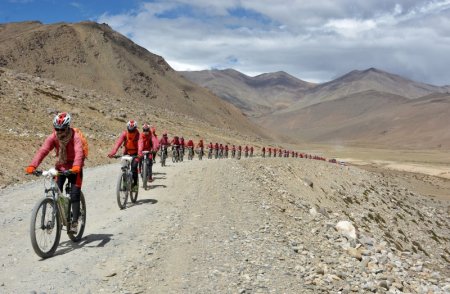 The similarity, however, ends there. This journey is longer and tougher, the prize has no financial value or global recognition and the participants are not professional cyclists but Buddhist nuns from India, Nepal, Bhutan and Tibet.

Five hundred nuns from the Buddhist sect known as the Drukpa Order, on Saturday complete a 4,000-km (2,485 mile) bicycle trek from Nepal's Kathmandu to the northern city of Leh in India to raise awareness about human trafficking in the remote region.

"When we were doing relief work in Nepal after the earthquakes last year, we heard how girls from poor families were being sold because their parents could not afford to keep them anymore," 22-year-old nun Jigme Konchok Lhamo told the Thomson Reuters Foundation.

"We wanted to do something to change this attitude that girls are less than boys and that it's okay to sell them," she said, adding that the bicycle trek shows "women have power and strength like men."

South Asia may boast women leaders and be home to cultures that revere motherhood and worship female deities, but many girls and women live with the threat of violence and without many basic rights.

From honor killings in Pakistan to feticide in India and child marriage in Nepal, women face a barrage of threats, although growing awareness, better laws and economic empowerment are bringing a slow change in attitudes.

The bicycle trek, from Nepal into India, is nothing new for the Drukpa nuns.

This is the fourth such journey they have made, meeting local people, government officials and religious leaders to spread messages of gender equality, peaceful co-existence and respect for the environment.

They also deliver food to the poor, help villagers get medical care and are dubbed the "Kung Fu nuns" due to their training in martial arts.

Led by the Gyalwang Drukpa, head of the Drukpa Order, the nuns raise eyebrows, especially among Buddhists for their unorthodox activities.

"Traditionally Buddhist nuns are treated very differently from monks. They cook and clean and are not allowed to exercise. But his Holiness thought this was nonsense and decided to buck the trend," said Carrie Lee, president of Live to Love International, a charity which works with the Drukpa nuns to support marginalized Himalayan communities.

"Among other things, he gave them leadership roles and even introduced Kung Fu classes for the nuns after they faced harassment and violence from monks who were disturbed by the growing shift of power dynamics," she said.

Over the last 12 years, the number of Drukpa nuns has grown to 500 from 30, said Lee, largely due to the progressive attitudes of the 53-year-old Gyalwang Drukpa, who was inspired by his mother to become an advocate for gender equality.

The Gyalwang Drukpa also participates in the bicycle journeys, riding with the nuns as they pedal through treacherous terrain and hostile weather and camp out in the open.

'Praying is not enough'

The Drukpa nuns say they believe they are helping to change attitudes.

"Most of the people, when they see us on our bikes, think we are boys," said 18-year-old nun Jigme Wangchuk Lhamo.

"Then they get shocked when we stop and tell them that not only are we girls, but we are also Buddhist nuns," she said. "I think this helps change their attitudes about women and maybe value them as equals."

South Asia, with India at its center, is also one of the fastest growing regions for human trafficking in the world.

Gangs dupe impoverished villagers into bonded labor or rent them to work as slaves in urban homes, restaurants, shops and hotels. Many girls and women are sold into brothels.

Experts say post-disaster trafficking has become common in South Asia as an increase in extreme events caused by global warming, as well as earthquakes, leave the poor more vulnerable.