As humans, we have the chance to practice all four foundations of mindfulness 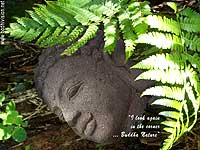 Bangkok, Thailand -- This week we have yet another important question for Phra Acharn Manop Upasamo, with an answer that reminds us why Vipassana meditation is so important in the practice of Buddhism.

Question: You said there are two main types of meditation: deep concentration (Samatha) and mindfulness (Vipassana). Why did Lord Buddha say that Vipassana is "the only way" to escape the endless cycle of suffering?

First, advanced deep concentration meditation means your mind will reach the state of jhana or a simple, non-questing, tranquil state of mind. When Samatha practitioners reach this stage in their meditation, they feel completely detached and unaffected by sensations and feelings of the ordinary world, and they remain in that state for a long time. When your mind is in this dormant mode, naturally you are not likely to learn anything.

On the other hand, Vipassana, mindfulness meditation, is just that. Your mind is totally awake and you are being continuously mindful of what happens to your body and your mind. In other words, you are learning something about your body and your mind with every observation you make, in every little moment of your life.

Now, what's next? If you were to continue to practise Samatha meditation throughout your life and reached the advanced level of the simple, non-questing, quiet state of mind, you would be reborn as an Arupa Brahmin or Asanyata Brahmin, both a type of higher being. These two types of Brahmin have two distinct characters: they represent the tranquil state of mind with no physical body and have a very, very long life.

The state of being: having no substantial body form like that of humans beings means that they would be unable to practice Vipassana. This is because to practice mindfulness, we need to be able to practice all four foundations: body, feelings, mind and mind objects. So the life of a Brahmin is nothing more than mere existence. Just as when they practiced Samatha, they can learn nothing.

Lord Buddha foresaw that his doctrine would survive no more than 5,000 years. But a Brahmin's life is much longer than that. This also translates into their missing out on the opportunity to learn how to practise Vipassana meditation and permanently escape from the cycle of birth, and in so doing, from rebirth and all suffering.

A good example is that of Lord Buddha's former teachers, Arara Dabos and Utaka Dabos. After Prince Sidhartha was ordained and went in search of how to end all suffering, he went to study in many schools, the last being that of these two teachers who were prescribing deep concentration meditation as "the way."

Because of his strong determination, Prince Sidhartha was able to reach the highest level of jhana but felt something was still missing. He found that he could not completely rid himself of the kilesas, or mental defilements, by simply practicing deep concentration meditation. He could only suppress them by this form of meditation. But once out of that trance state of mind, all the suffering of life remained the same. Therefore, he set out on his own and, by trial and error, concluded that mindfulness meditation was the answer and eventually, by this method, achieved enlightenment.

Once enlightened, Lord Buddha thought of his two teachers. He wanted to go back and teach them - to help them escape all suffering. However, he discovered that they had already died and were reborn as Brahmin. It was then that Lord Buddha expressed his sorrow for both of them, for they could not be reached or taught. By the time their life cycles as Brahmin ended and they were ready to be reborn again, Lord Buddha's religion would already cease to exist.

Therefore, all of us should be happy that we were born as human beings in this life, and having discovered the truth of Buddhism, been given the opportunity to learn and practice Vipassana. Lord Buddha said these are the world's rarest blessings. Why? Because as a human being, we have the chance to practice all four foundations of mindfulness. In this respect we are better off than those who are born in the same state as Lord Buddha's two teachers.

So use your four foundations of mindfulness well. The path to dhamma made possible by Vipassana arises out of the accurate observation of how we see, smell, hear, taste, touch and feel. From right observation comes right understanding of cause and effect. Our ears hear a voice and the mind determines what it is, generating an emotional response that results in a physical reaction. If we can step back with a "detached" attitude and observe what's going on in a non-judgmental fashion, then we are practicing Vipassana. That is a knowing state of mind, and our first step to eventual enlightenment.

So please, maintain your meditation. You have the rest of your life to practice.