Buddha - The Great Humanist among the world religious teachers

New Delhi, India -- The year 2006 marks the 2550 anniversary of the Buddha-Jayanti or Birth of Gotama the Buddha. In the history of the religions of the world, Gotama the Buddha, a religious teacher, did not make any claim to the fact that he is an incarnate, or a messenger or a descendant of any Divine Being. Lord Buddha maintained that he is a human being, who has realized the nature of life through his own knowledge and virtue, and made an end to suffering, which is a universal phenomenon. 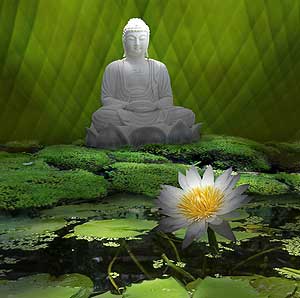 It is in this sense that He is considered to be an ‘uttara manussa’ or a super human being. It is indeed a pleasure and a privilege for me to have got this valuable opportunity to write about Gotama the Buddha.

Remembering a great religious teacher, like Lord Buddha, in this context, becomes meaningful only insofar as we can draw insights, lessons and inspiration for this crucial task. Therefore, let me elaborate a little on how the life of the Lord and His teachings are going to be helpful in discovering our own potentiality in finding lasting solutions for the problems we are faced with.

We know that Gotama the Buddha was born in the 6 century B.C. in Madhaya-pradesha of Bharata where the religious atmosphere was complex and the social atmosphere was tense. Gotama the Buddha, as Prince Siddhartha, saw that human life was sorrowful and wished to find a lasting solution. With His own experience as a Prince, with all the luxuries, He knew that gratification of senses was not the answer. With rigorous self-torturing practices He knew that the opposite end too was not the answer. Finally, He discovered the solution, the termination of suffering by following what is today known as the Majjhima Patipada or the Middle Path. With this realization He came to be known as the Buddha or the Enlightened One, who realized the Four Noble Truths, namely, suffering, its origin, its cessation and the path leading to its cessation.

After this great realization, the Buddha wanted to give this message to as many people as possible. He wished to make the people realize that, His message could be understood by anyone who has intelligence to follow the Path. It was very difficult for Lord Buddha to convince His listeners that they could practise this message by themselves. On the one hand, a strong religious belief advocated that it is through the grace of a Divine Being that liberation from Samsara is possible.

It was of fundamental importance for Gotama the Buddha to show that He was only a guide who could lead His followers to the Goal. He had to struggle to liberate people from their ideological bonds and slaveries. In the well known Kilima Sutta (of the Anguttara-nikaya of the basket of Discourses) Lord Buddha, addressing a group called Kalamas said that they should not accept assertions made by any one for any one of the following ten reasons: one must not accept any statement for it is presented as the revealed truth, for it is the traditional belief, for it is hearsay, for it is the scripture; for it is logical, for it is methodical, by reflecting on its structure, for it agrees with one’s view, for it seems agreeable or for that the speaker is one’s teacher.

Having given this advice He further said, to reject any assertion on good and bad and what is desirable and what is not desirable only when they see for themselves that a particular assertion leads to what is not skilful-akusala, namely, craving, hatred and delusion; and accept only if it leads to the absence of those three roots of un-skillfulness.

In this statement, Lord Buddha allows freedom for knowledgeable human beings to make their own decisions on sound grounds. We must remember that the Buddha rejected all what He referred to above. What He said is that they could be either true or false. Since they are not guaranteed for what is morally right always, the Lord Buddha said that one must know t for oneself in order to decide one way or another.

In the teaching of Gotama the Buddha, the human being has been given a very high place due to his or her potentiality. We must, of course, understand this Buddhist position correctly. Bestowing a very high position to a human being does not mean that he is supreme and the highest and that he has the liberty to make use of all other forms of life to satisfy his wants, guided by his insatiable greed. Buddhism rightly admits that human beings are endowed with vast intellectual potentiality. But that does not mean that he can use his powers to cause destruction to his own species or other beings. Human beings can be superior; but they are not supreme.

In the teaching of the Buddha, this high position given to human beings has two meanings. One is to underscore the potentiality of human beings to achieve the ultimate freedom from samsaric suffering.

If one has intelligence and will, any one will be able to achieve what the Buddha achieved on His own. In this potentiality, Buddhism does not see any distinction between men and women or among various divisions among human beings.

In the Buddhist Sangha there are four groups, namely, bhiksu, bhiksuni, upasaka and upasika (both male and female monastic members and both male and female lay followers). As the followers of the Path, monastic members are considered to be in a more favourable condition insofar as the final goal is concerned, than the lay followers. Still there is no real difference among these groups if anyone of them wish to attain the final goal.

Lord Buddha’s role in the Sasana, His religious organization, was not that of a saviour but that of a guide. The Buddha is described, in a formula the Buddhists use everyday to honour him, as ‘the guide to gods and human beings’ (satth devamanussariam). This clearly shows how the Buddhist tradition perceived the role of the Buddha. In the Dhammapada, the Buddha makes the following statement; ‘tumhehi kiccam ätappam - akkhataro tathagata’ - ‘You must strive for yourself; the Buddhas are there only to show the path.’ In other words, the Buddha shows the Path; but to follow it is the responsibility of the follower. The Buddha or anyone else, for that matter, cannot do it on behalf of another.Now, what does this message say to us, who live in the beginning of the 21 century? The message of the Buddha is ultimately to create a society where people behave towards others with wholesome motives guided by a sense of generosity, friendliness, and right understanding.

The teaching taught by the Buddha is for human beings to follow with his own intelligence and the final goal advocated is achieved by any human being who has will and intelligence. In this sense, what the Buddha taught is a form of humanism and the Buddha is a humanist, humanist par excellence, for He achieved the total purity by eradicating all the defiling factors in the mind.

The Path taught by the Buddha is an ethical path which ultimately leads human beings to cleanse their own inner being and achieve thereby inner peace and harmony, which ultimately should serve as the basis for the peace in the world at large.

May the Blessings of the Noble Triple Gem Guide all of us. [Source: Daily Mirror]