Sydney, Australia -- THEY SAY THE WALK IS important. Not the place, but rather how you get there. The walk mum says that she most remembers is the one where you're walking and you don't even realise it, and then you realise that you're walking along and you think, oh, this is good. 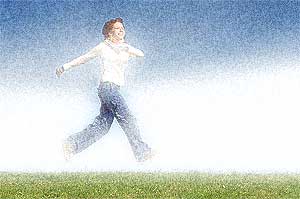 I walked the length of the room. It could have been to the end of this continent, to the foot of a northern cliff edge - motioning legs to stand like a totem and peering out over the aching blue of a Timor Ocean - or it could have been only from the soft bend in my arm to the wrist, a single step. The distance was irrelevant; it was that I walked however far it was, for you. My eyes caught first the railing, and I willed my hand to take hold of it, and then there was my mother's own hand; I knew I'd need to take hold of that also. I did, and with the steadying of each side of my body, the raising of each swollen foot, I eased myself into the 37 degrees where you and I did meet.

Minutes dropped against the tiling. All the old time cluttering the bathroom, let it go, I asked for all the yesterdays and tomorrows to leave the room. Leave me here in this moment without the wish-wash of worry. I clamped my feet against the end of the bathtub and heaved all the bloodied love and need that I had hidden. Touch your baby's head if you like. And I slipped a shaking hand into the water between my legs, to touch, almost unexpected - the crown of a skull. I held your head there and waited for the swell of contracting tide to bring you into this place. The stopwatch lady came in to the room and clicked the outside of the clock face as you wailed against my breast for the first time. 3.27pm.

Defining moments, things that hold onto us, burnt into ourselves, tattooed onto the memory of muscles, leached like love into our bones, twisted aches in the guts. Giving words and picture memories to the unsayable, patchworking heartbeats and footsteps and skin.

I think about the walk to get there, to where I had lain in the bathtub. What it meant for me to walk. What it's always meant for my family to walk. I am born from a long line of walkers. My great-grandfather the Afghan cameleer, who walked caravans of desert animal through scorching plains and sand; I'd imagine him pacing ship decks over long weeks to new land, from one dusty landscape to another. Where, in this country, he'd walked the waiting lines, walked the boundaries, just as my great-grandmother did. She was one of many Aboriginal gypsy women that awash my bloodline.

My childhood, how it gave homage to the past, that we could still get some place by our walking. We had feet and shoes and the will.

The bell chimes. Small brass cymbals, slung over the rung of each finger. Once, and I brush my imaginary robes aside. Unfolding hands, opening them like autumn petals falling to make the cup shape. Easing my forehead against the wood, doubled over, I prostrate, once, twice, three times. It seems all the restlessness in the world couldn't burden the foot of the Buddha. We've walked half-way up Emei Shan Mountain, Sichuan Province; China in the height of winter, where you sleep atop of the baby backpack leaned against the far wall of the shrine room, while I pray.

When I'm here I'm different. It's before I was your mother. I'm back at Nan Tien Temple in Wollongong, lifting and placing each meditated foot against the grass, emptying my mind of the close-by whizzing traffic from the Princess Highway, of the earth, the soil, weeds, the cool breeze on my nape and what I'll do for Christmas when I get out this summer. I'm in Sonada, India, waking before sun and incense clouds for puja, walking nights out to the iced mountain grass to relieve my giardia bowels.

Or I'm in the Tibetan Centre in southern Scotland, near Lockerbie, where once a plane flew above the rooftops and dropped bodies from the sky like heavy snow, where I walked the bank of a blessed pine-hugged river every day, walked the stretch of the poppy field, the kitchen, the prayer hall. I knelt, I swept and I walked these peaceful places, these pit-stops in the circumferences of travelling feet.

If I think of why I went to these places, on my own and as a teenager, I think that I had already an understanding of Buddhism, because the basic ideas were part of the way we were brought up in my family, even in its most unconscious practice. When I was exposed to Buddhism, it was as if there was this platform from which the stuff I thought were the right things and the wrong things were bounced off.

How our parents had the ability to laugh at all times, especially in the face of adversity. How they respected simple things like food, how it was grown, how thankful we were, and never wasting. And also I suppose I came to these places, as many travellers do, out of curiosity, out of the willingness to help out, out of the ease of exchanging a bed for your work in the kitchen or the gardens or cleaning the monks' quarters. Buddhism was much like walking in itself - some place quiet to mull over your problems and then forget about them. It was these places that also made words spill from my insides and onto page, long paper letters, postcards, journals, poems.

The first poem I ever read was by Robert Frost, it went along the lines of:

. . . two roads diverged in a yellow wood, and sorry I could not travel both and be one traveller - long I stood, And looked down one as far as I could, to where it bent in the undergrowth, though took the other as just as fair and having perhaps the better choice, because it was grassy and wanted wear . . .

I remember reading this poem for English class, written in this proper faraway language, and it having stirred me so much. I dropped out of school to go around Australia with my boots and tent, just a couple of weeks after the first time I'd known of this yellow wood, this alternative. The poem had changed the course of my life, walked me in other ways.

Now my daughter and I are taking the long way to the harbour, past the expanse of yellow sand, the flags being mast and dug into the shoreline. On this route we catch the morning birds fleeing the air, trailing the trawlers back in from last night's netting. This way, we witness the early morning beginnings in the midday progress, the fish being caught, the assembling of cafe chairs, the stretching and warming up of Achilles and calf. The half-day order of things that we take for granted.

We'll walk this way again in the afternoon and see the packing away of the day. This is the walking that survives my mind. I think I may go crazy, from all this baby routine, this sleeplessness, the smell of toast, the car-door slam, bird song, silent sounds of the suburbs.

I do the walking; I walk the length of the cycleway for me, for me to be good for you, my daughter. I push the pram that I don't like the idea of: not being close enough to feel your breath but close enough to need to keep checking that you're still breathing. This is the pulling away and pleading of motherhood, I imagine. I find it hard to be unattached and attached at the same time. I take my eyes for the first time that morning off you and onto the mundane events of everything else, the relief of anything else but your face, that contains so much of my heart, which it hurts. I can hide behind the canopy of the pram, looking indistinguishable to bystanders, looking the serene everyday, strolling mum, even under the pressure of my face almost cracking open from the inside.

My feet pad steadily. I smile contented and soon, after a while, you are quiet in the happy distraction of birds and leashed dogs and I become contented, against the simple rhythm of footsteps.

It is these walks where I flee into the old time. I think of all the places my feet have stepped, places I might never step again. In tow of my older brothers, across the beaches and secret playgrounds of our childhood, weekend rock-hopping up dry riverbeds to the escarpment that tilted over our home town. The snowy peaks and rock gorges of the Nepalese Himalayas, the endless shoulders of hitch-hiking highways, throwing thumbs to trucks and strangers, dog walking in the English countryside, owning the fields and sprinting alongside Archie, the Rhodesian ridgeback, outrunning our legs and wrestling down by the creek that would drift past the Anglican cemetery.

There is something to be said about my feet, when you're older. I'll tell you where they've been, of who the callous pads have roughed against, whose knee caps they've coiled themselves under for warmth and to draw skin to skin closer. Where the earth's slipping mud has taken my toes, where giggles have fallen upon the hip-width-apart space between each sinking foot. The red or black or felt-tip pen scribbles on the nails and cuticles. The blisters, the boils, the burns, the dropped knives, the rusted nails, the hot sand, the bare-footed gravel tiptoe to the letterbox, the bee-sting, the bindi-eye, the broken, the beautiful journeys and the ugly.

It was your feet that stole the beats from my heart and sent them racing into the depths of exhaustion and soul. You, whose feet are born of my blood, whose little toes are still as soft as they've always been. There are momentous walks in all our lives. Your first I remember more clearly than any other.

I am curled up, belly down on the couch, my arms embedded into the warmth of milky breasts, my face on its side, facing you. You motion your body forward on the ground, push your hands under your centre of gravity, arch your back, straighten your legs and let your torso follow. All by yourself, from your own want, you swagger towards me, laughing and shifting your bent arms about as to steady yourself. In pure delight, you make it all the way to the edge of the couch where I lie and greet you with laughter and uncontrollable sobbing, crying my joy and pain across the carpeted room.

You're no longer a baby, you're a girl, I'd realised. You walked the length of the room. The distance was irrelevant; you did it for me, and for yourself. From that first contraction, to that first step, to the end of our days - I will continue to let you go. To let you walk alone.

At the close of that yellow wood poem it says that he took the road less travelled by, and that that had all the difference. However unexpected, however beautiful, however painful that distance, if ever that walk comes to end, it's the walk like mum had said, where you're taking those steps and it's so right and so natural - that you don't even notice. It is our walking, in our minds, or under our feet, the life in motion - that's what really counts, along the way and in the end.

-------------------------
Tara June Winch's first book, Swallow the Air, published by University of Queensland Press, this year won the NSW Premier's Literary Award for New Writing. She is working on a second novel about Afghan traders and camels along the Silk Road and to Australia.