Evansville, Indianan (USA) -- The Buddha's footprints, or Buddhapada, are Buddhist symbols that have several legends and symbolic meanings attached to them. 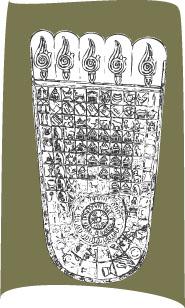 << The Buddha's footprint, or Buddhapada.

Buddhist legend says that after the Buddha became enlightened, his steps created imprints in stone. Another story says that, as an infant, the Buddha took seven steps that symbolized his spiritual power.

The footprints also remind followers that the Buddha has entered nirvana and is no longer present in the physical world.

Typically, Buddhapada are depicted with all five toes of the same length and with Buddhist symbols such as the dharma wheel, lotus, swastika or three jewels on the soles. Sometimes the feet depict the 32, 108 or 132 marks of a Buddha arranged in grid format.

Some sculptures of the Buddha show the soles of his feet adorned with Buddhist symbols.