Prajapati, the first Bhikkhuni: Retelling from the Pali Canon

Yangon, Myanmar -- Now, it came to pass that Lady Prajapati (aunt and foster mother of the Exalted One) heard from Krsa Gautami’s own lips of the bliss of Nirvana. Thereupon Prajapati, already a lay disciple of Buddha, went with longing for the Highest Attainment to Nigrodha Park where Shakyamuni was. 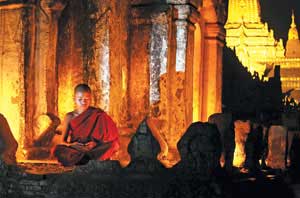 << A Buddhist novice meditates at a corner of Arnandar Pagoda in Bagan, some 640 kilometers north of Yangon,. The 42 sq km plain of Old Bagan is dotted with some 3,000 ancient temples and is one of the key tourist attractions in Myanmar.
AFP

“It would be for my welfare, O Lord,” said Prajapati, “if the Perfect One would reveal to me a teaching, hearing which from the lips of the Perfect One I might dwell alone, solitary, zealous, enthusiastic, and firm in purpose.”

“Well, my dear Gautami aunt,” replied the Buddha, “I will teach you about teachings in general. There are bad religions in the world; and those you ought to avoid. How can you tell a bad religion?

“But of whatever teachings you can assure yourself, ‘These doctrines conduce to dispassion, to detachment, to material poverty, to frugality, to contentedness, to solitude, to energy, to delight in harmlessness’ - of such teachings you may affirm with certainty: ‘This is the Dharma; this is the discipline of the Aryas; this is the Master’s teaching.”’

Prajapati Gautami was pleased with this useful lesson; and not many days afterward she returned to the Tathagata with another request.

“It would be good, Lord,” she said, “if the Perfect One would permit women to go forth from the household life to the homeless state under the Dharma and discipline declared by the Tathagata.”

Three times did Lady Prajapati make this petition, and three times the Buddha refused her, saying: “Enough, O Gautamid! Do not desire that women be permitted to go forth from the household life to the homeless state under the Dharma and discipline declared by the Tathagata!”

Then Prajapati Gautami, at the thought, “the Perfect One does not permit women to join the Sangha,” became sad and sorrowful. With tears moistening her eyes, she saluted the Tathagata by walking around him rightwise. And then she went away.

The autumnal cool season had come, the robes which the monks had made were finished, and the Perfect One, having stayed at Kapilavastu as long as he wished, set out on his rounds toward Vaisali, chief city of the Vajis and Licchavis.

Having arrived there, he resumed residence in the Hall with the Peaked Roof in Great Grove. And in the meantime Prajapati Gautami had cut off her hair, put on yellow robes, and set out from Kapilavastu with a large company of women who wished to renounce the world. Among them was Princess Yasodhara, Buddha’s wife.

Journeying by stages, the Shakyan women came at last to Vaisali and went to Mahavana and stood outside the entrance porch of the Kutagarasala.

Now, the monk Ananda saw Lady Prajapati standing there at the head of the women, her feet swollen and covered with dust, her countenance sad, and her eyes filled with tears. “Why are you standing there outside the porch, O Gautamid?” he asked her.

“O renerable Ananda, it is because the Perfect One does not allow women to go forth from the household life to the homeless one under the Dharma and discipline declared by him!”

“How do you know this, O Gautamid? Have you presented your request to him?”

“Yes, my Lord Ananda,” replied Prajapati sorrowfully, “I asked him while he was staying at Kapilavastu; and he refused permission.”

“In that case, O Gautami, remain where you are for a little while, and I shall ask the Perfect One if he will permit the going-forth of women.”

Thereupon Ananda went inside the monastery and approached the Tathagata. Three times Ananda presented his request that women be allowed ordination, and three times Buddha refused him, saying: “Enough, Ananda! Do not desire the going-forth of women under the Dharma and discipline proclaimed by me!”

Then Ananda thought, “It is clear that the Master refuses to permit women to join the Sangha. What if I now ask him in a different way?” So Ananda said to the Perfect One: “Lord, are women capable, after going forth from the household life to the homeless one - are they capable of realising the fruit of Stream-Entering?”

“Women are capable of doing so, Ananda,” replied the Tathagata.

“Lord, are women capable of realising the fruit of Once-Returning?”

“Yes, Ananda, women are capable of realising the fruit of Arhantship.”

“Then, Lord, if women are capable of attaining the fruits of the four supramundane paths, consider how great a benefactress Prajapati Gautami has been. She is the sister of the mother of the Perfect One; and as his nurse and foster mother she gave him milk, feeding him from her own breast when his mother died.

It would be a good thing, Lord, if women were allowed to go forth from the household to the homeless life under the Dharma and discipline declared by the Perfect One.”

The Tathagata considered Ananda’s words and then replied, saying, “If, Ananda, Prajapati Gautami will accept eight strict rules, let that be reckoned to her as full ordination.

“(1) A Bhikkhuni, even if of a hundred years’ standing, shall first salute a monk, shall rise up before him, shall entreat him with folded hands and make obeisance, even if that monk has only that day been ordained.

(2) A nun shall not spend a rainy season in a district where there are no monks.

(3) A Bhikkhuni shall look to the Order of Monks to be advised of the new and full moon days and the coming of a monk to preach the sermon.

(4) At the end of the rainy season retreat, a Bhikkhuni shall invite criticism in the presence of the assemblies of monks and nuns regarding offenses seen, heard, and suspected.

“(5) A Bhikkhuni guilty of serious offense shall go on probation for a year.

(6) When a Bhikkhuni has spent two years in the practice of the precepts, she shall ask for full ordination.

(7) A Bhikkhuni shall neither rebuke nor scold a monk on any pretext.

(8) Nuns may not reprove monks, but monks may reprove nuns.

“These rules are to be honoured, respected, revered, and worshipped, and are not to be transgressed as long as life shall last. If. Ananda, Prajapati Gautami will accept these eight strict rules, let that be reckoned to her as full ordination.”

Ananda went out at once to Prajapati and repeated to her the eight strict rules which he had received from the Buddha.

A murmur of joy arose from the company of women who had accompanied Lady Prajapati from Kapilavastu; and all gladly accepted the eight rules for nuns.

Many of the women, including Prajapati and Yasodhara, quickly attained Nirvana, just as Kisa Gautami had done even while still a lay woman. True happiness was theirs at last - happiness which time could not destroy nor gods or devils take away.

Then Ananda returned to the Perfect One, bowed respectfully, and said: “Prajapati Gautami has accepted the eight strict rules. The sister of the mother of the Perfect One has become ordained.”

“If, Ananda,” the Buddha replied, “women had not been allowed to go forth from the household life to the homeless one under the Dharma and discipline proclaimed by the Tathagata, the religious life would have lasted a long time, the good life would have lasted a thousand years. But as women have now gone forth, Ananda, the religious life will not last long, the good life will last only five hundred years.

“Just as families in which there are many women and few men are easily molested by robbers and pot-thieves, even so in that congregation in which women have received ordination the religious life does not long endure.

“Just as a man, Ananda, might with foresight build a dike for a great reservoir to prevent the water from flowing out, so have I with foresight proclaimed these eight strict rules not to be transgressed as long as life shall last.”

And then, addressing the monks who had gathered around him, Shakyamuni said: “In Himalaya, king of mountain ranges, O monks, there are tracts of level country, delightful places frequented by both monkeys and human beings. In such places, monks, hunters set traps of pitch in the monkeys’ tracks to catch them.

“Now, those monkeys who are free from folly and greed, on seeing a pitch-trap. keep far away from it. But a foolish, greedy monkey is unable to resist the temptation.

“So, monks, that monkey, thus caught in five ways, lies down and howls, a prey for the hunter who comes and roasts him for eating there and then.

Verily, it is the five-stranded cord of sensual pleasure, namely, objects sensed by the eye, ear, nose, tongue and body - objects desirable, charming, bewitching, and pleasure-producing.

“Roam in pastures that are your own, O monks, keep to your ancestral range; for, so roaming, Mara gets no chance, no opportunity, to overcome a man. And what is a monk’s own pasture? It is the four Fundamentals of Attentiveness, namely, contemplation of body, feelings, mind, and thoughts, seeing all as they really are.

“A monk, for example, duly realizes that this body, doomed to decay and death, is composed of flesh and blood, bone and sinew, hair and nails, liver and lights - a vile skin-bag filled with urine and dung and various kinds of stench, nine-holed, and trickling here and there.

“And thus he abides, likewise reflecting on feelings, mind and ideas, seeing all in conformity with reality. That, O monks, is a monk’s own pasture, his own ancestral range.”