The path to bliss and wisdom

The best way to learn about meditation is to practise it, says Ajahn Brahm

Bangkok, Thailand -- 'Teach what you know," says the old adage. Perhaps a more powerful directive would be to teach what you love. For Ajahn Brahm, the two come together in teaching meditation. 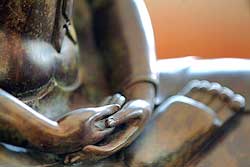 Having first begun meditating while a student of theoretical physics at Cambridge University, the English-born monk later immersed himself more deeply in meditation in the Thai forest tradition as a disciple of renowned master Ajahn Chah. Ordained now for 33 years and currently the abbot of Bodhinyana Monastery in Australia, he has since become a widely respected meditation teacher in his own right and has published a book on meditation entitled Mindfulness, Bliss and Beyond: A Meditator's Handbook.

Bliss is certainly a key element of his teachings - especially as a motivation for people to start meditating. Meditation, Ajahn Brahm emphasizes, actually creates happiness. It leads to inner peace and the experience of the "pure and empowered" mind, which is deeply blissful ("better than sex!" is the catchy tagline he offers).

Moreover, Ajahn Brahm claims that meditation trains one to be happy when off the meditation cushion as well, for once one learns how to be happy from within one can remain at ease regardless of what's going on in the world.

Despite knowing of such benefits of meditation in theory, most people still find it difficult to establish meditation as a regular practice. Often, people make the mistake of approaching meditation like going to the gym to work out, driven by guilt. But if you focus on the happiness that comes from meditation, Ajahn Brahm says, you'll do it because you like to do it, want to do it and actually experience its immediate and long-term benefits. And for those who may be motivated to meditate during times of stress but find laziness sets in when their lives get rosier, he points out that one can practice meditation not just to get rid of acute suffering but to generate even more happiness.

Rather than thinking of meditation as work, Ajahn Brahm explains it as "mental relaxation". When you really know how to relax the mind, meditation becomes fun.

He says cheerfully, "Meditation's not hard. If it's hard, you're missing the point."

So, what is the point?

In a word, stillness.

The Pali word samadhi is often translated generally as "meditation" or more specifically as "concentration", but Ajahn Brahm prefers "stillness" as he feels it is more descriptive of the word's true meaning. It also indicates how to actually reach the state of samadhi - by being still, by not doing anything.

To clarify what meditation is and how to do it, Ajahn Brahm likes to perform a little demonstration. He holds up a glass, with the water in it sloshing from side to side. How can one make the water still? Ajahn Brahm stares intently at the glass and screws his face up with exaggerated effort, intoning, "I'm going to meditate! I'm going to 'concentrate'! I'm going to hold this cup of the water until it is totally still!" He pauses briefly, then asks with mock anxiety, "Is it still yet? Is it still yet?'

"That's the way many people meditate," he chuckles. "The problem is, the water never gets still that way, and people just get frustrated. The way to do it is to put the glass down. At first, the water moves more, but then soon after it gets totally still, like it could never do if you were holding it.

"The same is true for meditation: At first, when you let go, the mind gets more restless. But then it gets still, like it couldn't if you were holding it, trying to make it still. When you put the mind down and let go of all control, meditation becomes so easy."

When the mind is still, it is energised, and that energy gives you joy - this is where the happiness of meditation comes from.

Stillness also leads to insight. Once the mind is still and silent, it automatically sees more clearly. "A tadpole can only know what water is when it becomes a frog and gets out of the water. Similarly, only when your mind is still can you know what thinking is, what all the movement and agitation and craving is," he explains.

Another evocative simile Ajahn Brahm draws on comes from his experiences travelling as a young man in South America. He had been wandering in thick rainforest when suddenly he came upon a huge pyramid. Not having seen the horizon for days, it was a revelation to get to the top of the pyramid. "Suddenly, I could see my whole world laid down in front of me and see this incredible emptiness - infinity - surrounding the noisy jungle," he recalls with wonder.

Deep meditation is like climbing the pyramid above the jungle of our thoughts, our family life, our work life, our world. Only when you rise above it and attain stillness can you see the bigger picture of reality.

Among different schools of meditation, however, varying views exist about how high up the pyramid, or to invert the simile, how deep into samadhi it is necessary to go to develop liberating insight. Some methods emphasize the development of moment-to-moment mindfulness rather than deep meditation.

In particular, some teachers caution against "getting stuck on bliss", particularly that experienced in the deep meditation states called jhanas. For while the promise of bliss through meditation may be appealing to many, it also raises red flags to those practitioners who say they are wary of meditating for "just" relaxation or bliss, being intent on meditating for wisdom.

Of the sometimes vigorous debate, Ajahn Brahm says, "it's wonderful that you can have debate in Buddhism. You're not forced to believe anything." Still, he is forthcoming in offering his views on some common points of contention, subject of course to each individual's own scrutiny and trial.

For one, he is unequivocal in teaching the necessity of developing the jhanas. Ajahn Brahm's book has been called "bold" for plainly putting forth this position and offering vivid descriptions and instructions about the jhanas, which few other books have thus far done. The jhanas may seem esoteric, but Ajahn Brahm says that it is not only monks who can practice them. He reports that many of his lay disciples have also developed them during retreats.

"It's so clear from the teachings of the Buddha that you really need those jhanas," he says. "There has been a distortion of the Buddha's teachings [in saying otherwise]. I'm quite harsh on this point, but it needs to be said."

In his view, the problem is that people, especially in Western countries, can emphasize mindfulness training (in daily life) so much that they do not recognise there are different levels of mindfulness with varying levels of effectiveness in developing higher insight.

As for the fears of "getting stuck" on bliss, Ajahn Brahm maintains there is no such danger. "You don't get stuck on the jhanas. It is said in the suttas that anyone who indulges in jhanas can only expect one of four results - stream winner, once-returner, non-returner, arahant [the four stages of enlightenment]. If you do 'get stuck on jhanas', what'll happen is you'll be enlightened."

The misgivings some have about jhanas is related to what Ajahn Brahm calls the "Great Debate About Samatha Versus Vipassana". For new meditators, the terms can be confusing as different explanations are given about them. Some traditions hold that samatha (calm) and vipassana (insight) are separate types of meditation, and developing jhanas is "only samatha" and does not result in wisdom. Ajahn Brahm disagrees, saying "the two are indivisible facets of the same process. Calm leads to insight and insight leads to calm."

To tell it as a story, as he is wont to do, a happily married couple, Mr Sam Atha and Mrs Vi Passana, decide to go on a walk up a hill. Sam wanted to go to the top because it was so peaceful up there. Vi accompanied him, but she wanted to go up there for the beautiful view. They also took their little dog called Metta. So Sam, Vi and Metta walked up the hill. The higher they got, the more Metta wagged his tail. When they got to the top, Sam enjoyed the beautiful peace, but as he had eyes, he also saw the amazing view. Vi enjoyed the view, her original purpose, but she could also feel the calm. And Metta was running around happily. In meditation, insight, calm, and compassion always go together.

With all the different and contradictory points of view about meditation that can be confusing, Ajahn Brahm's advice is simple: Start meditating. Then one can figure things out from one's own experience.

2) Let go - Don't try to gain anything or get rid of anything through your meditation.

3) Do nothing - The more you try to control the mind, the stiffer it becomes and the less suited for meditation. Just do nothing and leave the mind alone and it will become still on its own.

4) Be kind and gentle to yourself - Adopt a kind and gentle attitude in your meditation. Don't be too forceful with your body and mind. Don't try too hard or be too impatient. Gently and softly is the fastest way.

7) Keep theory and practice in balance - Theory is like a map, practice is like a flashlight. Both are needed to find treasure, but both have to be kept in balance.

------------
Talks and guided meditations given by Ajahn Brahm can be downloaded from http://www.bswa.org/. His book, 'Mindfulness, Bliss and Beyond', is available in local bookstores. The Buddhist Society of Western Australia (of which Ajahn Brahm is spiritual director) is currently building a meditation centre to offer residential meditation retreats free of charge. Donations can be made online at http://www.bswa.org/modules/donations/.