Buddha images and their significance

Colombo, Sri Lanka -- Devotees of the Buddha needed to know what the Great Master physically looked like, and consequently the Buddha image evolved over the centuries. 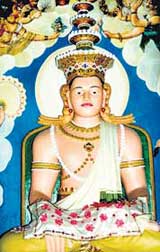 Following the Greek conqueror Alexander the Great’s invasion of north India, Hellenic culture took root in the Ghandara Valley. Artists carved in sandstone beautiful figures of the Gotama Buddha. The Ghandara civilisation was the cradle of Buddhist art and an oasis of Buddhist culture.

It was in that age that the intellectual monk Nagasena started to convert royalty. Several large monasteries existed at Gilgit, Udayana and at Rohini, in the upper Kashmir region. The land today known as Afghanistan was once a Buddhist country. There were two great statues of the Buddha in the Bamiyan Valley, on the silk route between China and Persia (modern-day Iran). Sadly, these statues were destroyed in August 2001 by the Taliban.

Over time the facial features of the Buddha image evolved according to the cultures of different Buddhist countries. Buddha icons in India and Bhutan show elongated eyes and ear lobes. The head bears a high “unhisa” or hair-knot or turban (it was believed that wisdom radiated from the high hair-knot). Indian icons also carry an “unna” (a mole between the eyebrows).

In Lanka, during the reign of the Kandyan kings, all Buddha icons in temples displayed a “Budu Res” (an aura of bright blending colours), signifying wisdom. The aura was shown in the form of a full circle behind the Buddha’s head. In Thailand, the Buddha is shown wearing an elongated gold crown (as in the Temple of the Emerald Buddha, in Bangkok).

Although many believe the Buddha was about 5 feet 10 inches tall, the Buddha is often represented in exceptionally large statues, especially those erected by the Mahayana school of Buddhism. Large Buddha statues came up in Polonnaruwa and Maligavila, when Mahayana Buddhism held sway in Sri Lanka under Kings Mahasena, Agbo VI, Parakrama Bahu I and Nissanka Malla.

It is believed that the Buddha image at the Nirvana Vihare in Kushinara, India, is the world’s oldest (it was at Kushinara that the Buddha achieved Nirvana). The 16-foot statue, sculpted in the Gupta period, was discovered by archaeologist Archibald Carlyle around 1880, when he was working with Sir Alexander Cunningham, Archaeological Commissioner of India.

In Myanmar (Burma), at a point midway between Bagan and Yangon, is a temple with a large image of the Buddha wearing a large pair of spectacles! The story behind the statue goes back more than 200 years to a queen who was grateful to the Buddha for helping her regain her sight.

It was when the Mahayana Buddhist tradition emerged, some 700 years after the death of Gotama Buddha, that the concept of Rupakaya and Dhammkaya arose. Bodhisattva worship became prominent in countries such as Nepal, Bhutan, Vietnam, China, Japan and Tibet. 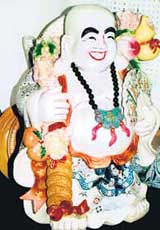 Another development was the worship of beings thought to be the next Buddha, or Bodhisatvas. Statues and porcelain images of the Laughing Buddha are found in temples and homes in China, Hong Kong and Taiwan.

The Laughing Buddha, or Metteya Buddha (also known as Budai), is associated with the mystic Taoist and Shinto cultures. The figure is often shown carrying a small linen bag containing rice plants, sugar candy, precious stones and money. He is regarded as the patron of the weak. He is depicted as stout and wearing a loose robe. His most striking feature is his big belly which, according to Chinese mythology, is the “seat of souls”.