Kuala Lumpur, Malaysia -- RECENTLY, I was invited to join a group of monks on a study tour of the different cultures and religions in China. We were led by the Most Venerable Master Chin Kung, the Honorary Adviser to the Cheng Ho Multi Culture Education Trust (CHMCET), which sponsored the trip. The aim was to promote religious harmony and world peace. 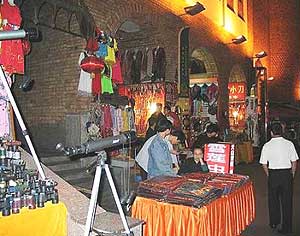 << The Grand Bazaar marks the commercial centre of the very busy city of Urumqi, the capital of the Xinjiang Uygur Autonomous Region.

Apart from the six Buddhist monks, their assistants, and the organising committee members, advisers and staff, the entourage included leaders of the other major faiths in Malaysia (Islam, Christianity, Hinduism, Sikhism and Taoism).

I was invited as an interfaith leader. There were 35 of us, from Malaysia, Singapore, Australia, and China.

The programme was very tight and we went straight from the airport to the first event even before we could check-in the hotel or rest. We visited the Diaoyutai State Guest House, which is an ornate building used as a resort palace by ancient emperors. Thereafter, we were treated to a grand reception.

We also visited the China State Bureau of Religious Affairs. There we were given a thorough briefing on the relationship between the government and the various religions.

The Malaysian religious leaders were given ample opportunity to ask questions and I was impressed by the openness of the bureau’s director in responding to our queries. They also hosted a dinner in our honour.

China is anxious to convince the world that she is now very tolerant of all religions, provided that there is no political activism, especially any hint of independence or secession, among the adherents.

This is particularly so in the light of the recent events in Tibet, and the sporadic reports of separatist movements in some of the Muslim-majority regions.

Adventure on the Silk Road

From Beijing, we flew to Urumqi, the capital of the Xinjiang Uygur Autonomous Region. Urumqi was one of the main trading cities on the ancient Silk Road, and remains a very busy trading centre today. Goods and people from the former Soviet republics, Eastern Europe, Mongolia and the rest of China converge here. It is also turning into an industrial city.

Here we visited the old Shanxi Mosque, famous for its unique Chinese architecture.

Another highlight was the International Grand Bazaar, which marks the commercial centre of this very busy city. We were guests of a local Muslim businessman who proudly showed us his collection of old handwritten copies of the Qur’an. We also visited the Xinjiang College for Qur’an Study.

The beauty and enigma of Urumqi and Xinjiang are familiar to those who have read the classic story Journey to the West.

Xinjiang is larger than Malaysia, but has fewer people. There are 47 “minority” ethnic groups, the largest of which are the Uygurs. The people were once Buddhists, as evidenced by the ruins of Baizikeli Cheonbuldong (Thousand Buddhas Grottos) and the ancient Buddhist city of Gaochang.

Now the majority are Muslims, something not surprising seeing its close proximity to Khorasan (central Asian Muslim countries, which include the former Soviet republics) and the transmigration of Muslims since the 7th century CE.

Both the Buddhist historical sites were near Turpan, another trading city on the Silk Road, about three hours by bus from Urumqi. The highway to Turpan traversed the arid, barren and windy Gobi Desert. It forms part of the vast Turpan Basin, which is surrounded by the snow-topped Tian Shan mountains. Here is a display of nature’s bizarre contrasts.

The Gobi Desert is searing hot. The worst is the region near the Flaming Mountain. The flaming red mountain and the red soil surrounding it give it its apt name.

The surface ground temperature can reach 80°C and the ambient temperature can reach 50°C. At the Gaochang ruins, we walked with the monks under the scorching sun with only our cowboy hats as protection. Some did apply sun-block, but most of us were unprepared for the heat. Thus many of us did not complete the tour of the ruins.

If not for the strong winds that help cool the body, one can get cooked to death if stranded in the desert at noontime, which was what scared me when our bus broke down.

Fortunately, the driver was able to fix it within half an hour, while we were busy taking snapshots of ourselves in the blazing sun. In any case, we could easily summon help because our mobile phone signals were full even in the middle of the desert!

Being so far from the sea, the Turpan Basin is the lowest, driest and hottest place in China. At night, the cold winds can freeze you. The changing seasons also bring exquisite beauty to the different terrains and regions of Xinjiang. Even the Flaming Mountain becomes calm and charming in winter.

Despite the predominance of arid land, Xinjiang is able to supply power and an abundance of fruits and agricultural products to the whole of China. Its Grape Valley produces many varieties of grapes, and its raisins are exported to far away lands.

The strong winds of the desert are being harnessed for electricity. The highway is flanked by thousands of giant modern windmills. Turpan now has the world’s largest wind-powered power generation station.

There is also a salt lake that we passed by that is big enough to supply the needs of the two billion Chinese for the next 50 years.

But what is most remarkable is how this desert-land has been turned into an oasis that supplies the world with among the best and most nutritious grapes and raisins.

The valley of grapes

The answer lies in an ingenious well and canal system established by its inhabitants more than 2,600 years ago, which makes it the third Wonder of Ancient China after the Great Wall and the Grand Canal.

The system involves digging over a thousand wells on the mountains slopes right down to the valley to tap the underground canals and rivers that are fed by the melting snow on the mountain tops.

The canals altogether are over 5,000km long!

In the olden days, the wells were dug using buckets and pulleys. Later, modern methods were used, and the same underground canal system sustains the people, the orchards and the grapevines until now.

It is this clean mountain water and the abundant sunlight that make the grapes thrive in Xinjiang. The pears and peaches are also plentiful and exceedingly sweet. Many varieties of nuts are also marketed in the bazaars and roadside, with almonds being the favourite.

We visited an Uygur family who had been well-diggers for many generations and had switched to growing grapes when modern methods made their skills obsolete.

Our host was an expert on grapes and raisins and gave us a lesson on the goodness of the different varieties of raisins. Some raisins are good for the heart, for the urinary system, for diabetics and so on. We were also shown how some unscrupulous traders actually put dangerous dyes and additives to make their raisins look good or appear like the expensive varieties.

The way of health

Back in Beijing on our way home, the farewell lunch was at a Buddhist-themed vegetarian restaurant. On its menu is this caption: “The True Way of Health is to boost the body’s energy in all its forms”.

I couldn’t agree more. I have been trying to educate the public about the various forms of energy that we thrive on, and hence influence our health, and qi or life force is just one of them.

Although this entire trip was about understanding the different cultures and religions, and forging peace and harmony among us, there is at least this wise quotation for me to share about health.

The way of peace

Since this was an interfaith study tour, during the long bus journeys, we took turns explaining about our respective religions to the others. When we got tired of religious talks, we switched to singing and jokes.

This trip was under the supervision and guidance of the Most Venerable Master Chin Kung, possibly the most successful interfaith peacemaker in this region. He is respected for his work in China, Taiwan, Malaysia, Singapore, Indonesia, Australia and many other countries. He has established the Pure Land College in Australia, and the Centre of Chinese Cultural Education in Lujiang, China.

Through his work, he has transformed many lives, and even entire communities. At 82 years of age, he is still working hard for religious harmony and world peace.

He is humble, soft-spoken and ever smiling. During this trip he carried his personal fold-out fan everywhere. On it is written the fundamental teachings of Islam. Yet he is among the most famous Buddhist monks in the world today. I truly respect his wisdom and open-mindedness.

Throughout the trip we were given five-star accommodation and first class meals and treatment. I must thank Tan Sri Lee Kim Yew, the President of CHMCET, for his generosity in making the trip possible, and Datuk Tan Chai Ho, Chief Adviser of our study tour, and his team, for making it a memorable and enriching experience.

-------------------
Dr Amir Farid Isahak is a medical specialist who practises holistic, aesthetic and anti-ageing medicine. He is a qigong master and founder of SuperQigong. For further information, e-mail starhealth@thestar.com.my.