A former monk trains volunteers to resolve disputes that might otherwise turn violent.

BATTAMBANG, Cambodia - A timeless problem nearly ruined the Buar Sramum's marriage: Her husband, a fish seller, doesn't make enough money, and the money he makes he often mismanages, making it even harder in this impoverished village to feed the couple's three children. When Mrs. Sramum berated her husband, things got heated, and they argued bitterly for weeks. 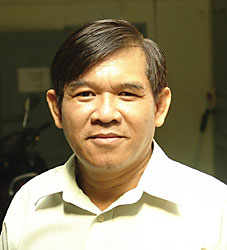 Disputes like this are rarely discussed publicly in Cambodia, but they are a common cause of domestic abuse. They are also one strand in a larger set of village conflicts contributing to human rights violations and violence in Cambodia's countryside, including land disputes, petty crimes, and conflicts over resources such as water and cattle.

Central to the problem is that there is often nowhere to go for help: Decades of war and poverty have left Cambodia's legal system in disarray. Courts are often too far away or too expensive for the rural poor.

But the Sramums – like thousands of others – didn't become another statistic, thanks to Monychenda Heng, a former Buddhist monk who is helping to restore two of the most precious resources Cambodia lost in the devastating years of the Khmer Rouge: trust and hope.

Since 2002, Mr. Heng's organization, Buddhism for Development, has pioneered the concept of dispute resolution committees in seven northwestern provinces. The committees – which include five to nine members culled from the community, including two seats mandated for women – listen to both sides of a dispute. Then they offer advice, usually free of charge, sometimes at a nominal fee of about 50 cents.

The results are radical – not necessarily for the advice given, but for the fact that poor people like Mrs. Sramum can seek mediation at all.

Today she and her husband are not fighting any more. "The committee gave advice to my husband that he should change his attitude, because he always gets angry when he comes from the field after work," she says, prompting a sheepish grin from her husband, and laughter from the people sitting around her.

In the couple's Norea commune, a village of 991 families in Battambang Province, about 1,000 community leaders have been trained in conflict resolution. Of 33 complaints referred last year to the local conflict resolution committee, 30 were resolved, with two others referred to a local court and one to provincial authorities.

The success rate is just one of the many small victories that Buddhism for Development, founded in 1995, believes can add up to a better future for Cambodia.

Mr. Heng knows from personal experience that hope is an incremental enterprise. When he was young, his aspirations of becoming a monk were seemingly derailed when the Khmer Rouge swept to power. Like thousands of others, Heng and his family fled to a refugee camp near the border of Thailand in the late 1970s. It was there that he met the Venerable Pin Sem, his spiritual master, and incubated his Buddhist approach to social development.

Under Pin Sem, he saw that the principles of Buddhism – physical development, emotional development, and compassion – could be a tool to inspire the economic and social development Cambodia needed to get back on its feet. And as he educated himself, he began teaching children about Cambodia's history, so that they wouldn't forget what their country was and what it could be again.

Ten years later, in the late 1990s, Heng not only returned home to his native Battambang Province, but won a scholarship to Harvard University – no small feat for a poor refugee with no formal education.

Heng says the practical necessities of life at Harvard compelled him to give up the monkhood, but that the Buddhist principles continue to underpin his group's work. With donations from the US and Denmark, Buddhism for Development has trained an army of facilitators, youths, and volunteers, including many monks and nuns, to undo the Khmer Rouge's painful social and economic legacies. They teach farmers to plant better seeds, dispense microloans, and care for patients.

Heng is careful to point out that his organization is not trying to spread Buddhism, and highlights that many of his beneficiaries are Muslim communities – as in Norea commune, where almost half the families are Muslim.

Perhaps Buddhism for Development's most important work is that of its small-scale dispute-resolution committees. "Trust among Cambodian citizens has broken apart.... Low education and illiteracy – especially at the grass-roots level, where the majority citizens are living – make people more vulnerable to conflicts," Preap Kol, a community development activist who has worked with Heng, writes in an e-mail. "In this context, a project to provide [a] mechanism [for] conflict resolution at the village level is important."