Maintaining the faith that things will change for the better

Kyoto, Japan -- The selection of one "kanji" (Chinese character) that best represents the year has become an established tradition in Japan in recent years. 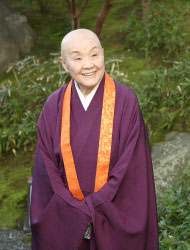 This year, the character, "hen," whose meanings include "change" and "strange," was chosen from the numerous ideas that were submitted for consideration. Per tradition, Seihan Mori, chief priest at the Kiyomizu Temple in Kyoto, boldly wrote the character with a brush and ink in a ceremony.

Indeed, there were no shortages of extraordinary natural phenomena including earthquakes, extreme weather, floods, typhoons, and tornadoes. In addition, we experienced ceaseless wars and almost daily suicide bombings.

There was no respite from the constant fear of a changing world. The notion of the South Pole melting, resulting in floods the entire world over, has grown into more than just a notion.

But like Noah's Ark, if God or Buddha were suddenly to appear and tell me that he would save me and only me, would I be happy? Where is the joy in surviving after everyone I love has perished? It is our encounters and connections with other people that make life worth living. If I alone were to survive, I would go mad with loneliness.

I imagine that all we can do when faced with the end of the world is resign ourselves to our demise all together and wait as we embrace our families and friends.

The most painful change this year has been the economic recession that hit us at the very end. There had been a wide range of bumps previously that had threatened the lives of common folk, like the issue of medical care for the latter-stage elderly and the problem of pension defaults. However, when confronted with a situation that began with a stock market crash in the U.S. that spread into an unprecedented worldwide recession, one's feelings surpass fear. We have no choice but to cry with laughter.

The current situation only goes to show how meaningless money and things are in the end.

As someone who will be turning 87 next year, I recall the winds of a recession blowing the year I started kindergarten. The Great Depression hit in 1929, but the Japanese economy had been experiencing a slump from around 1922.

Because my father had agreed to be a guarantor for a relative, we were dragged into bankruptcy and ended up with nothing. As a "sashimono" joinery craftsman he supported about 10 apprentices, but had no other choice but to let them go. We also moved houses.

According to lore, small birds apparently gain popularity as pets in hard times, and lo and behold, tiny birds were all the rage then. My father, who was good with his hands, began making escape-proof birdcages that sold like hotcakes. Convinced he had hit the jackpot, my father became a seller of birds, using the entire house for his business. My older sister and I spent day and night with birds. Auctions took place every evening. Our house was full of life and it was all kind of fun.

Pushing his luck, my father bought a talking myna bird as a poster girl for the business. In a young girl's voice, the bird would call out, "Hello," and "Long time no see," and "What nice weather," to the customers. My father, a self-proclaimed "idea man," decided to set up a marriage for her with the most handsome myna in Osaka.

He issued rankings of potential suitors, aggressively advertising the upcoming nuptials. He spared no effort preparing for the event, even having a crested kimono tailor-made for himself. One morning, two days before the scheduled departure of our bird for the groom's house, our poster girl called out in a deep, threatening tone, "Slow economy, isn't it?" and "It bites, doesn't it?" We hadn't taught her those words, of course, but she had learned them from our customers, who had been uttering those very sentiments everyday.

The wedding was called off. No one wants a bird who talks about something as inauspicious as a failing economy.

When I think about the incident now, I still can't help but laugh. My father subsequently quit the bird business, resumed joinery, began making and selling Shinto and Buddhist altar fittings, and his apprentices eventually returned. I started elementary school, and my friends and I sang a popular song about a college graduate who has trouble finding a job during the recession.

During a lifetime, one is sometimes at the mercy of unexpected circumstances. One is sometimes thrown into a pit of misery, but we can't go on if we allow these moments to bring us down.

In Buddhism, we learn about the transience of all things. There's a tendency for this to be interpreted as an implication that we may die at any time, but that is not how I see it.

Nothing is never-ending. Everything keeps flip-flopping. Neither happiness nor misery last forever. As long as we learn to bear the worst and strive for better, the worst storms, too, shall pass. Tumbling into the depths of pain means there's a chance to use that momentum to jump right back up. On the other hand, taking one's happiness for granted can easily result in its sudden disappearance.

The Buddhist belief in the cycle of death and rebirth is also about transience. My wish in the midst of turbulence and misfortune is that we maintain the expectation and hope that things will change. Just look at the birth of a black American president. It was this year's most positive, transformative "change."