Cycling around the wheel of time

London, UK -- The lovely Victorian park which I visit most weekends is laid out in a roughly circular fashion. Entering by any one of the three gates you are faced with a choice - to turn left and follow the broad carriageway past the football pitches and rhododendron walk, or turn right and proceed past the tennis courts and children's playground, in either direction eventually completing the circle back where you started. 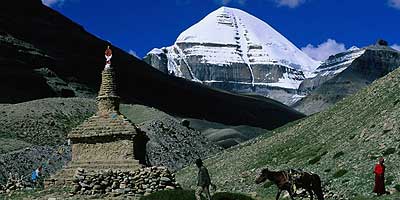 << Mount Kailash: the most arduous circumambulation in the world

I always turn left, clockwise - indeed have always turned left for the 20 or more years I have been going there. But it's only recently, since I've started cycling rather than walking around the carriageway, that I've noticed that I'm going against the flow. The vast majority of people on entering the park, appear to have made the decision to turn right and proceed counterclockwise. Why is this?

The term 'clockwise' originally arises from the daily rotation of the earth. The first clocks were made in the northern hemisphere and followed the model of sundials, which measured the movement of the sun from east to south to west - so 'sun wise' became 'clockwise'.

There is something particularly pleasing about completing a circle, and the act of circumambulation, usually around a sacred place or object, is a ritual to be found in all the world's major religions. Christianity has the Palm Sunday processional, which traditionally follows a clockwise direction - a fact probably determined by the old folk-belief that processing counter-clockwise, or widdershins, to use the Anglo-Saxon term, was considered bad luck. In Catholic churches, according to The Church Edifice and its Appointments by the Rev. Harold E. Collins, the Stations of the Way of the Cross may begin either on the Gospel side of the church (left of the altar) or on the Epistle side (right), but in either case they tend to follow a counterclockwise direction.

Pilgrims to Mecca also circumambulate the Ka'bah counterclockwise when performing Tawaf. In a note on the matter on Islamonline.net, Sheikh M. S. Al-Munajjid, a Saudi Muslim lecturer and author, explains that this is following the example of the Prophet, but sadly gives no explanation as to why the Prophet chose that direction in the first place. Sheik Al-Munajjid also advises that circumambulation is an act specified only for the Ka'bah as part of worship and is not to be done in any other place or situation.

Hindus and Buddhists always circumambulate in a clockwise direction. This week at Buddhism's most holy shrine of Bodh Gaya, pilgrims are celebrating the Kagyu Monlam, a Tibetan Buddhist prayer festival, when each day tens of thousands of pilgrims circumambulate the Mahabodhi temple and the Bodhi tree where the Buddha is believed to have been sitting in a state of meditation when he attained enlightenment 2,500 years ago.

I was in Bodh Gaya for the Kagyu Monlam a few years ago, and one of my most vivid memories is of the informal ritual that takes place each day at dusk, when thousands of candles are handed to pilgrims, who place them carefully along their path, on stones, steps and the ledges and crevices of shrines, transforming the grounds of the temple into a vast sea of shimmering light.

Thinking of this prompted me to watch again Werner Herzog's haunting film about pilgrimage, Wheel of Time, which was filmed at Bodh Gaya during another Tibetan Buddhist ceremony, the Kalachakra Initiation, and at Mount Kailash, in Tibet. Kailash is one of the most sacred places on earth - venerated in Hinduism, Buddhism, Jainism and in the pre-Buddhist, shamanistic Tibetan religion of Bön. The trek around Mount Kailash is almost certainly the most arduous circumambulation in the world. Pilgrims must hike some 32 miles at altitudes of up to 19,000 feet and each year there are fatalities arising from altitude sickness.

There are extraordinary scenes in Wheel of Time of the long crocodile of Buddhist pilgrims, swathed in blankets, robes and coats, and sporting a weird and wonderful assortment of headgear, some with flags and prayerwheels in hand, others prostrating themselves full length, as they follow a route across the desolate rocky plain, under a yawning infinity of blue sky, towards the snow-topped mountain. Coming towards them, determinedly against the flow, are the Bonpo, who always circumambulate in a counter-clockwise direction.

My gentle excursion around the park hardly compares - as sparkling as the mornings have been recently. As to why I've turned left and am cycling clockwise, the answer has nothing to do with Christianity, Buddhism, Islam, Bon - or even the movement of the sun. It seems to be, quite simply, because I'm left handed. Something to do with dominant brain hemispheres, apparently.