Footsteps of spring through the eyes of a Buddhist priest

Kyoto, Japan -- Of all Kyoto's festivals, the Aoi Matsuri can be held up as the city's representative festival. "The Tale of Genji," a novel written some 1,000 years ago, describes the festival day as busy, as spectators descended on the Heian capital from points beyond in hopes of seeing the festival procession. 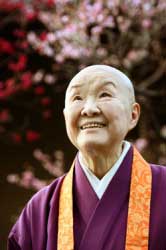 Even now, a woman playing the part of an Imperial princess makes her silent progress through the city every May 15, keeping the Heian period festival alive.

It so happens that May 15 is my birthday, and the festival parade always seems to be a celebration of my own special day, brightening my mood and making me forget that I have grown yet another year older.

Soon after the Aoi Matsuri comes July's Gion Matsuri, and the feeling that, ah yes, summer has arrived.

Interestingly, while it has become increasingly difficult to predict when it will become warm in spring, those in Kyoto look more to the cycle of the seasons laid out by traditional events and festivals rather than relying on weather forecasts to declare the end of winter, even though forecasts have become more accurate lately.

"Hey, it's getting warmer every day. Spring is on its way, don't you think?" someone may say.

"No," another would reply in the distinctive Kyoto accent, "It's too early to tell yet. Spring can't come until o-mizutori."

"O-mizutori," or taking water, is part of the shuni-e ceremony held at Nigatsu-do Hall in the Todaiji Temple complex in Nara from March 1-15. During the nighttime ritual, which cannot be seen by the general public, water is drawn from the Akai-ya well in front of Nigatsu-do Hall.

Every night from March 1-14, the monks participating in the ceremony light 10 torches (11 on March 12), ascend the stone steps to Nigatsu-do, and swing them around from the hall's balustrade. The flames of the 10 torches flare in the darkness, and shower sparks like falling flowers onto the heads of those below.

No one who has seen this magnificent spectacle could forget it, I imagine. I have been privileged to join the event many times since before I became a Buddhist priest, as well as the ceremonies inside the hall, and have stood in reverence of the monks' serene countenances as they descended from the Nigatsu-do on the final morning of the ceremonies. I always shiver in the cold, but after the rituals are over, I feel fiercely glad that I participated.

The shuni-e ceremony has gone on for some 1,250 years, since it began in the Nara period, but I must pray that it will continue.

The flowers used as offerings in the ceremony are artificial Camellias, made by the monks during the proceedings. These flowers, which have a different flavor from the genuine article, express a delicate beauty.

I also cannot miss the shuni-e ceremony at Nara's Yakushiji Temple. At Yakushiji, the shuni-e is held for seven days starting March 30, during which a multitude of different types of hand-made flowers in vivid colors are laid in front of the Yakushi Nyorai-zo image of Buddha. The offering of these flowers is known to ordinary people as the "Hana-e shiki," and is also a shuni-e ceremony. I have joined in this flower ceremony, too, since I was a layperson, and have always been struck by its beauty.

Speaking of Yakushiji, I often meet the master of that temple Eiin Yasuda at Buddhist proceedings. However, upon thinking I had long been remiss in paying a visit to the principal image of Yakushi I rushed away from Nigatsu-do in the middle of the o-mizutori ceremony. I ran to Yakushiji Temple to pray in front of Yakushi's imposing image.

Master Yasuda is often away these days, travelling in and outside Japan to pray for world peace, and I was happy to find him at his temple and accept his offer of a tour. The temple had been beautified since I was last there, and it was truly a sight to see.

Plum trees in full bloom heralded the turning of the season, and visitors stopped in their tracks as they passed under the boughs, drunk on the pure scent of the flowers. I suddenly noticed a bush warbler amongst the white flowers. It was not singing, but playing games in the blossoms. At Jakuan, my own temple, bush warblers always come in pairs, so when I saw the single bird where two ought to have been, I had a second look. I found the warbler's mate on the same branch of the blossoming tree.

The warblers sang not a note for Master Yasuda and I, but they did look just like the subjects of the Japanese painting "Ume ni Uguisu" (warblers in a plum tree), and we looked at each other and smiled.

"The East Tower (of the temple's two towers) is going to be renovated soon," said Master Yasuda, "and no one will be able to see it for 10 years. It was lucky that you could come when we can still look upon both towers."

In 10 years I will be 98 years old. If this tower is hidden from view for so long, then I shall etch the image of the old, black building in my mind.

"One's 70s are the best time in life," I said to Master Yasuda. "You must be looking forward to all the things you'll do over the next 10 years."

"One's 70s are the best time," the man mumbled as his smooth baby face lit up with a grin.

In front of the image of Yakushi, we offered up the hannya-shingyo sutra. Master Yasuda read the sutra in his famously beautiful voice, and I thought to myself that the sutra would have sounded much better had I not been reciting too. However, chances like these are rare, and I chanted along with him.

We did not offer prayers for any one person's health. Age and illness come to everyone, even oneself, and even if no names are mentioned in the prayer, Yakushi can see all. One simply has to press one's palms together and chant the sutra.

As we stepped outside, the scent of the plum blossoms wafted over to us on the breeze, and I felt the softness of spring.