New York, USA -- I recently spent an evening with Yongey Mingyur Rinpoche, the Tibetan lama who has been dubbed “the happiest man in the world.” True, that title has been bestowed upon at least a few extremely upbeat individuals in recent times. But it is no exaggeration to say that Rinpoche is a master of the art of well-being. 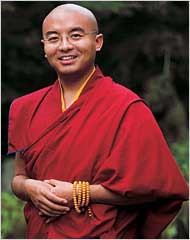 So how did he get that way? Apparently, the same way you get to Carnegie Hall. Practice.

I’ve had the pleasure of knowing Rinpoche a bit over the years, and always found him in good cheer. This meeting was no different. When I called him at his Manhattan hotel to arrange to get together before we were to discuss his new book, “Joyful Wisdom” at the 92nd St. Y, he told me he was in the middle of a shower – but not in the usual sense. The shower, he told me, had run out of hot water midway. When he called the front desk, he was told to wait several minutes and there would be more hot water. In this situation, I probably would have been peeved. But as Rinpoche told me this, he was laughing and laughing.

The only momentary glitch I’ve witnessed — a few years back — was slapstick: he sat down in an office chair with a faulty seat that suddenly plunged several inches with a thump. Once when this chair had done the same to me I cursed and groused about it for a while. But Rinpoche just frowned for a second — and the next moment he was his upbeat self again. Quickness of recovery time from upsets is one way science takes the measure of a happy temperament.

While annoyances like these are hardly life’s greatest tests, handling them gracefully takes a composure that few of us seem to have at our disposal.

Mingyur Rinpoche was not born into wealth and comfort. He spent his earliest years in a remote Himalayan village lacking even the most basic amenities. Nor was he a lucky winner in the genetic lottery for moods. In his book he recounts being extremely anxious as a child in Nepal, having had what a Manhattan psychiatrist would likely diagnose as panic attacks, and how he cured himself of this chronic anxiety by making his fears the focus of his meditation. He has had to earn his good cheer.

Rinpoche seems eclectic in studying paths to well-being, including Western recipes. A few years ago, he attended a five-day meeting at the Mind & Life Institute that brought together a group of neuroscientists and the Dalai Lama to discuss ways to overcome destructive emotions. He found that the Western scientific findings on emotions had much in common with his own approach to cultivating well-being.

But when it comes to his own pursuit of happiness, Buddhist theory and practice are Rinpoche’s chosen tools. He has done several years-long meditation retreats, under the tutelage of some of the most renowned Tibetan masters. Of course, what we mean by “happiness” can be elusive, what with the myriad varieties of good feeling running from ecstasy to equanimity. One flavor of happiness at which Rinpoche seems to excel has been well-studied by scientists specializing in how emotions operate in our brains.

Richard Davidson, who heads the Laboratory for Affective Neuroscience at the University of Wisconsin, has found one distinct brain profile for happiness. As Davidson’s laboratory has reported, when we are in distress, the brain shows high activation levels in the right prefrontal area and the amygdala. But when we are in an upbeat mood, the right side quiets and the left prefrontal area stirs. When showing this brain pattern, people report feeling, as Davidson put it to me, “positively engaged, goal-directed, enthusiastic, and energetic.”

Mingyur Rinpoche came to Davidson’s lab as one of a dozen or so meditation adepts, each of whom had put in anywhere between 10,000 and 50,000 lifetime hours of meditation. Research on expertise in any skill shows that world-class champs have put in at least 10,000 hours of practice; these were Olympic-level meditators.

One of the first findings from the research showed that when these adepts meditated on compassion, their left prefrontal areas jumped in activity an average 100 percent — by contrast a control group who were taught the same meditation practice showed an increase of just 10 percent. Two of the adepts had spectacular increases, in the 700-to-800-percent range, in key neural zones for good feeling. The more lifetime hours of practice, the greater the increases tended to be. All this seems to confirm the idea that in the realm of positive moods, as in nearly every endeavor, worldly or spiritual, practice matters.

So can we all get a taste of Rinpoche’s bliss?

Davidson worked with Jon Kabat-Zinn, a teacher of mindfulness meditation from the University of Massachusetts Medical Center, to see how a group of novices might gain from these methods. Kabat-Zinn, who has pioneered this contemplative method with medical patients to ease their symptoms, taught mindfulness at a high-stress biotech company; these beginners meditated for 30 minutes a day for eight weeks. Davidson’s measures showed that after the eight weeks they had begun to activate that left prefrontal zone more strongly — and were saying that instead of feeling overwhelmed and hassled, they were enjoying their work. So while the Calvinist strain in American culture may look askance at someone sitting quietly in meditation, this kind of “doing nothing” seems to do something remarkable after all.

Of course, there’s no guarantee of greater happiness from meditation, but the East has given us a promising path for its pursuit.

Another fruit of these spiritual practices seems to be a healthy dose of humility. When Rinpoche told my wife that he was being billed as “the happiest man in the world,” he laughed as though that were the funniest joke he’d ever heard.

----------------------
Daniel Goleman reported on the brain and behavioral sciences for The New York Times for 12 years. He is the author of several books, including his most recent, “Ecological Intelligence: How Knowing the Hidden Impacts of What We Buy Can Change Everything.” His Web site is www.DanielGoleman.info.