New Delhi, India -- THE vast spread of Indic philosophy across Asia since ancient times is one of the great miracles of history. The concept of samsara, of maya and mithya, the illusory nature of the material world around us, was crystallised in the Upanishads by the 8th or 9th century B.C.

The high purpose in life was to be able to see beyond this veil of illusion to the eternal truth which was beyond. People who were able to achieve this were known as Buddhas, or Enlightened Ones, and Tirthankaras, or Victors over the fear of Death.

Over the next two thousand years, this vision of life and of a path to escape from the web of maya spread to many countries of Asia. It pervaded the culture of present-day Sri Lanka, Myanmar, Thailand, Laos, Vietnam, Indonesia, Nepal, Bhutan, Afghanistan, Tibet, Central Asia, China, Korea and Japan.

The northern-most frontiers to which this philosophic view of life travelled was Buryatia in Siberia and Mongolia. It is believed that by the 13th century the Vajrayana form of Buddhism, which was born at the Nalanda university and which developed to its full height in the Vikramshila university (both in present-day Bihar), travelled through Tibet to Mongolia. The faith ran deep roots here by the 16th century and has survived the turbulence that the centuries brought.

The history of Mongolia’s association with the Buddhist faith goes back to the 13th century when the emperor Kublai Khan (who ruled China then) conferred the title Dalai Lama (Dalai is a Mongolian word meaning “wide as the ocean”) on the head Lama of the Sakya sect of Tibet. In the 16th century, the emperor Altan Khan conferred the title of Dalai Lama on the head of the Geluk sect. Later in the 16th century, the Mongolian ruler Avtai Khan built Buddhist temples in his capital Kharkhorum. It is believed that these temples were made on the foundations of earlier 13th century Buddhist structures here.

The greatest Buddhist king of Mongolia was Zanabazar of the 17th century. Himself a great artist, he built many temples. The finest Buddhist art that survives in Mongolia was made by him. A descendent of the legendary Ghengis Khan and Kublai Khan, he is believed to be the reincarnation of Javzandamba, who was one of the Buddha’s original disciples in India. Zanabazar created beautiful images of deities in gilt bronze. He was deeply devoted to the deity Tara, and many of the finest images he made are of her. Tara is seen in Buddhist art from the mid-5th century onwards. The earliest surviving sculpture of Tara is in the Kanheri caves of western India.

Zanabazar’s artistic style and conception of deities were influenced by Tibet, whose style in turn is based on those derived from India directly as well as through Nepal and China. The sculptures made by him represent a beautiful confluence of these traditions. The sculptures were objects of worship and were consecrated upon completion. Sacred mantras, or prayers inscribed on rolls of paper, were often kept inside the statues. 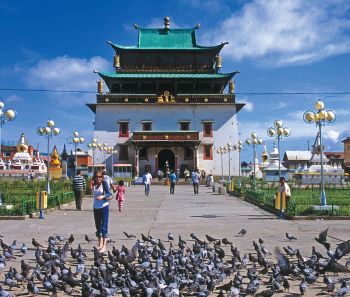 Deities began to be made in Indian Buddhist, Jaina and Hindu art from the 1st century B.C.-1st century A.D. onwards. By the Gupta period, in the 5th century, the most exquisite sculptures were being made. Indian artistic traditions travelled especially from the 10th century onwards from Kashmir and the plains of eastern India to Nepal and Tibet. These were deeply cherished in both lands, and schools of art emanating from the classic Indian sources were developed.

By the 13th and 14th centuries, the great Buddhist centres and universities of India were destroyed by foreign invaders, both in the eastern plains and in Kashmir. The roots that fed the Buddhist culture and art of the Himalayas and beyond were cut, and eventually Tibet and Nepal were left to preserve this rich heritage on their own. Over the centuries, in the vast expanses of the great mountains in Tibet, the liveliness and joyousness of the art gave place to a more formal note and sombre gravity.

In the Indic philosophy of aesthetics, it is believed that the ecstasy we experience on seeing something truly beautiful, be it in nature or in art, is akin to the final bliss of salvation. The moment of the experience of beauty is one of the highest states in which a person senses kinship with the whole of creation, a state in which the soul shakes off its material attachments. Thus, the ecstatic response to beauty was seen as a glimpse of the realisation of truth itself. This philosophy was most fully developed in Kashmir.

Abhinavagupta, the greatest aesthetician-philosopher of India, lived here in the 10th century, around the time when Tibet derived Buddhism from Kashmir. In that period, Saivism and Vajrayana Buddhism in Kashmir were deeply permeated by the philosophy of aesthetics.

The art of the Mongolian monasteries continues this sublime tradition. The art of Zanabazar takes us far from the noise and clamour of the material world to a deep fount of peace and beauty, which lies within each of us.

One of the highest forms of Vajrayana meditation is the Cham masked dance of the lamas. The masks cover the day-to-day nature of the lamas. They meditate for many days before the Cham so as to lose their ego and to become the deity on whom they focus their attention. For, on the day of the Cham, it is the deities who dance and not the lamas. Mongolia had one of the greatest traditions of the Cham in Asia until the 19th century. 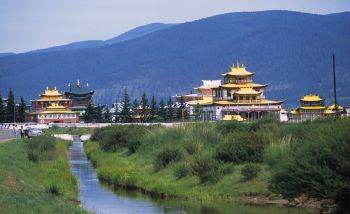 In Soviet times, in the first half of the 20th century, the Buddhist culture of this region was temporarily destroyed. Monasteries were razed to the ground and monks were persecuted. However, since the 1990s, the culture has been resurrected with ardent vigour. Monasteries are being reconstructed and the people long for the peace and inner joy which this philosophic vision brings.Buddhism came to Buryatia in Siberia in the middle of the 17th century, from Mongolia and from Tibet. By 1741, Buddhism was recognised as one of the national religions of Russia. Buddhist temples became centres of learning where Sanskrit, Tibetan and Mongolian languages and manuscripts were studied. By the 17th-18th centuries, the region of Kalmykia, around the river Volga, had become the first Buddhist part of Europe. At the instance of the Buryat Lama Agvan Dorzhiev, a Buddhist temple was built in St. Petersburg in 1915.

After the collapse of the Soviet Union in 1991, Buddhism is being revived in Buryatia. Old temples are being restored and new ones built. There is a deep desire among the people to look beyond the mundane and seek spiritual solace in Buddhist traditions.

In the beginning of the 20th century, Lama Itygelov was the Khambo Lama, the head of the Buddhists of Russia. In 1927, this devout yogi is believed to have voluntarily left his body to attain nirvana. The body, still seated in meditation, was secretly buried by lamas. In 2002, the body was taken out of the ground and placed in the Ivolginsky temple.

Studies conducted on the body since then have shown that its characteristics are still the same as those of a living body. The body remains in the sitting position of meditation and is soft. This miracle greatly inspires the Buddhists of Buryatia. It is through monks who have studied in India that Buddhist traditions are being revived today.

In historic times, these traditions of Vajrayana Buddhism were taken to many countries by teachers such as Guru Padmasambhava of the Nalanda university and Atisa of the Vikramshila university. Today again, in keeping with ancient Indian traditions, India has provided the climate for Buddhist universities and monasteries to flower and flourish.

In the middle of the expanses of Siberia, it is most interesting to come across lamas, all of whom speak Hindi, as they have received their Buddhist education in South India. A vision of life, of the search for the truth beyond the illusory nature of the material world, which was created in the first millennium B.C., continues in these distant lands till today. India continues to provide the peace and spiritual sustenance for these traditions.